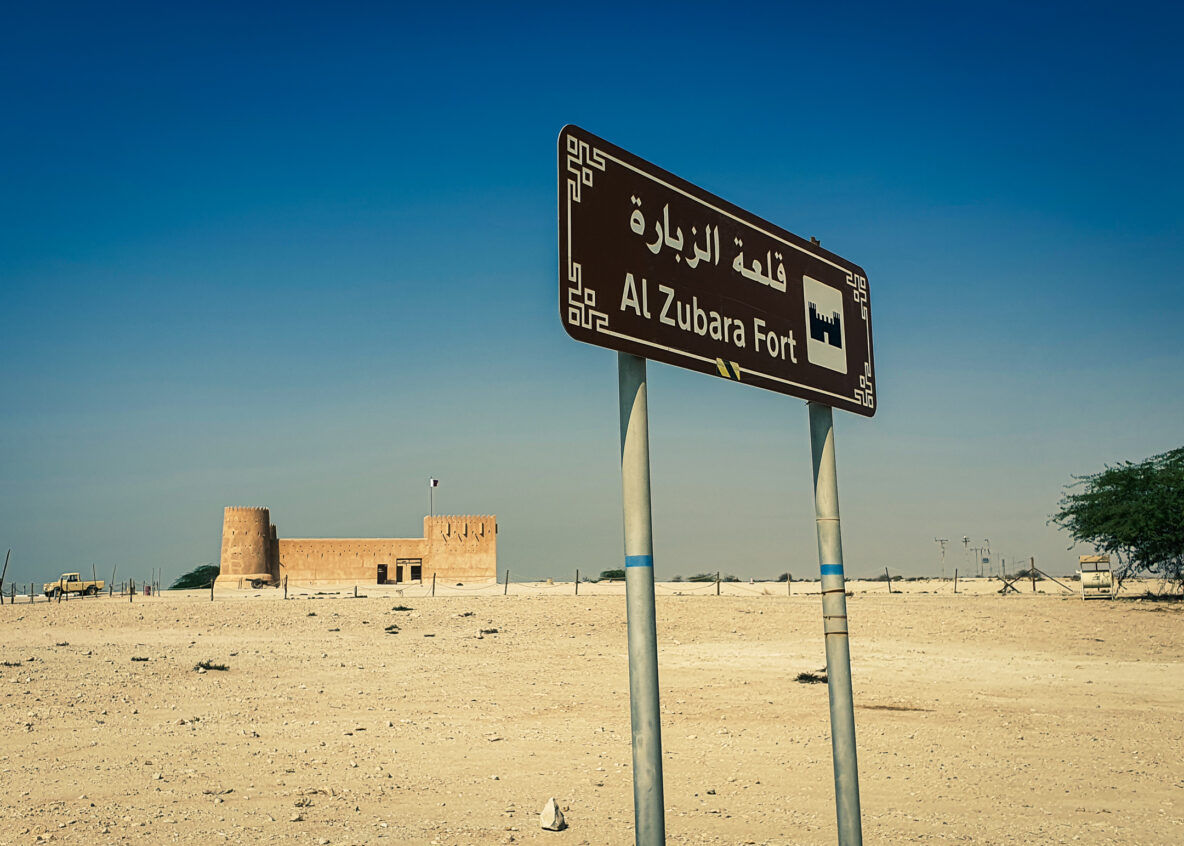 So with the ever-existing fear of COVID looming over our heads, once we saw the number of cases going down, and rules relaxing, it was time for the Hareeshs to get out of the house. We still wanted to be responsible parents and avoid crowded places. Since we have always preferred the outdoors to malls any day, a long drive along with a little history lesson was the best bet so far. The fort of Al Zubarah is something the kids had learnt about in school, so why not see it in person! It was decided. 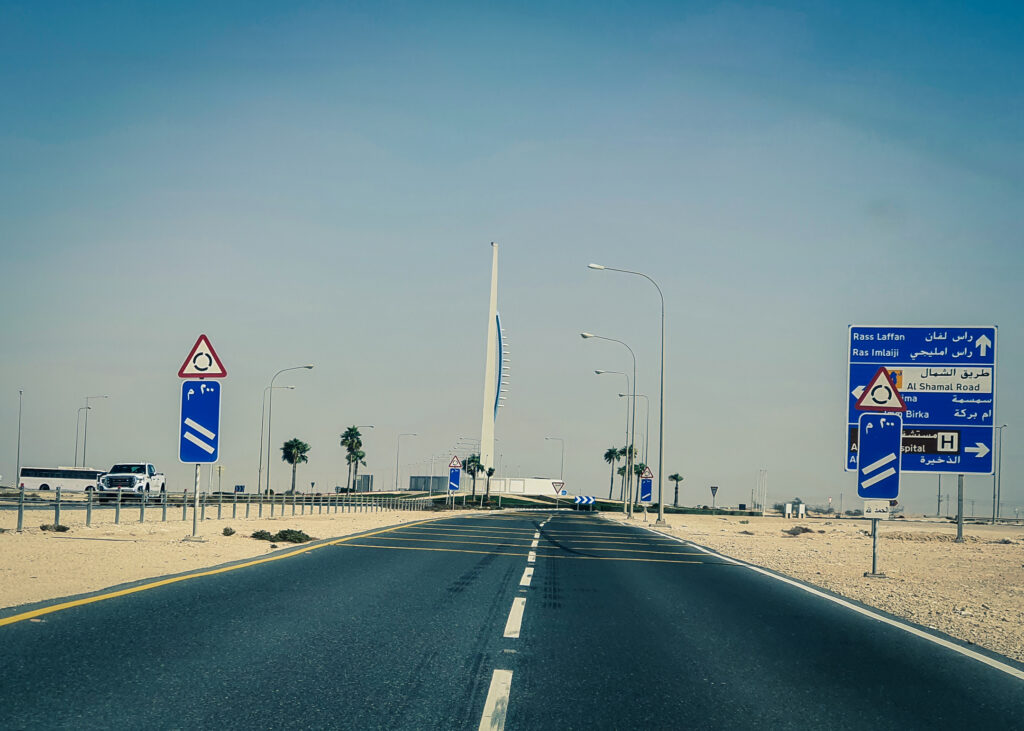 Located on the Nothernwestern coast of Qatar, the drive was to take us approximately 1.5 hours. So plenty of fluids and snacks along the way is a must. The Al Zubarah Fort is a historic military fortress built in 1938 under the then ruler of Qatar Sheikh Abdullah bin Jassim Al Thani. 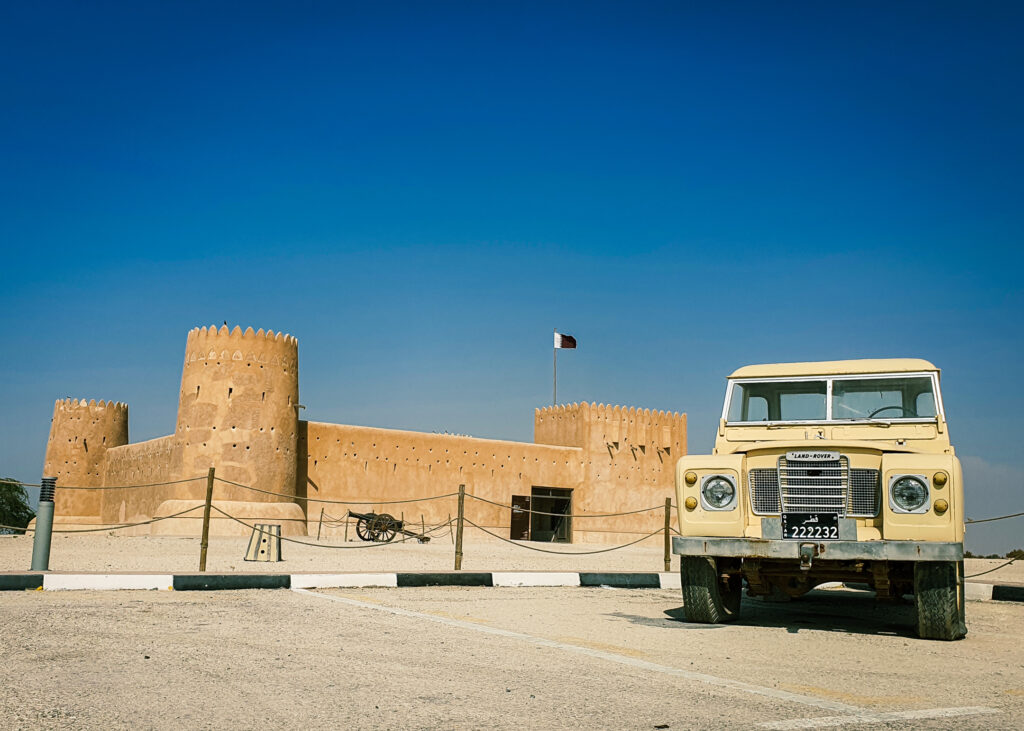 The architecture is very typical of what we see here locally. The walls were made of overlapping corals and limestone while the roof is typically covered with mud to keep the interiors cool from the blazing summer sun. We also noticed eight rooms on the ground floor that were constructed to accommodate soldiers. 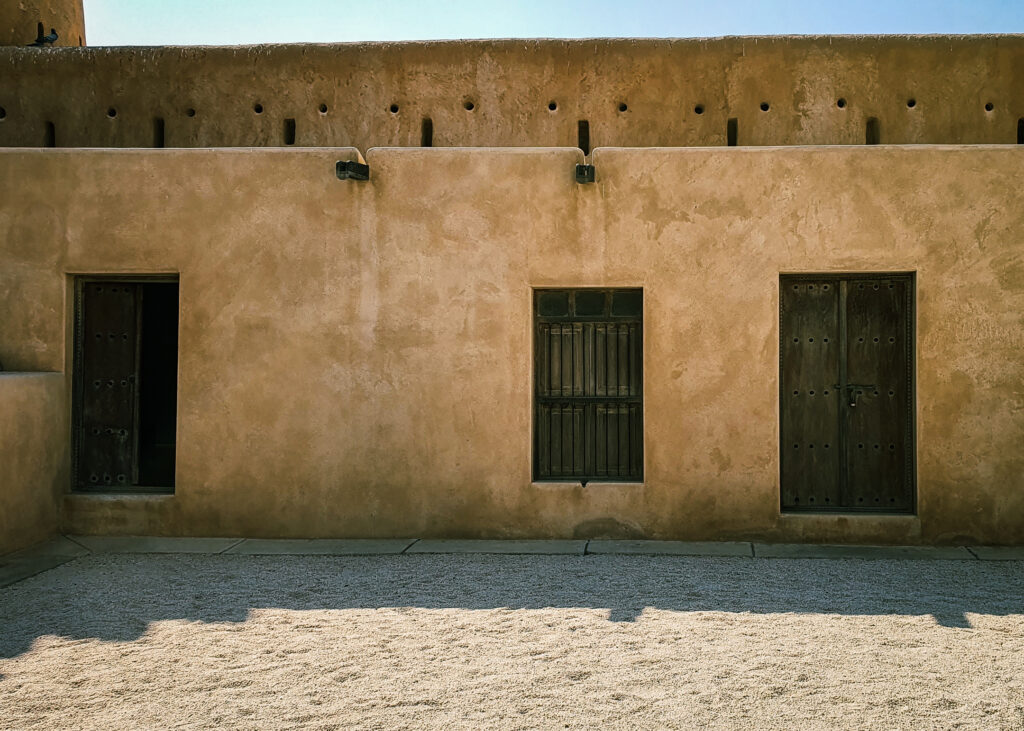 The fort also has external staircases which were used to climb up to the fort’s floors and a roof, that was cordoned off to the public when we visited. What was interesting was the well within the fort. Being situated along the coast, one would assume that the water would have been salty for consumption. But, the well once provided fresh drinking water all year round. It was dug entirely by hand through the hard limestone layers only to reach a thin band of freshwater. If it were dug too deep the water would become salty. Hence it must have required an amazing amount of precision. Unfortunately, it is now dry. 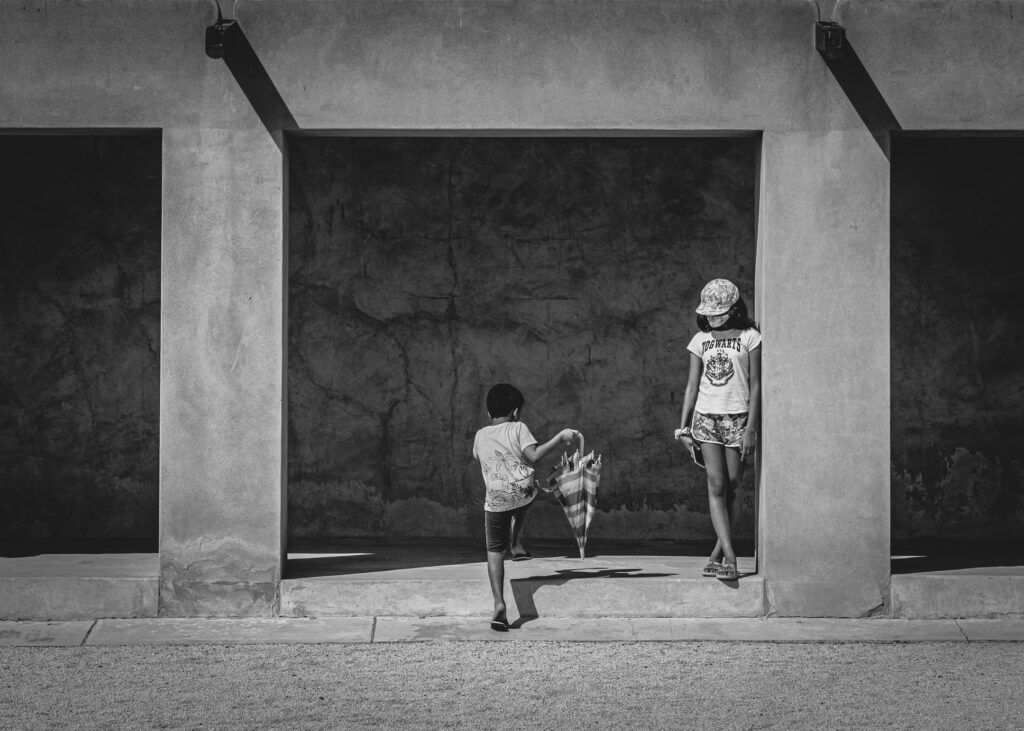 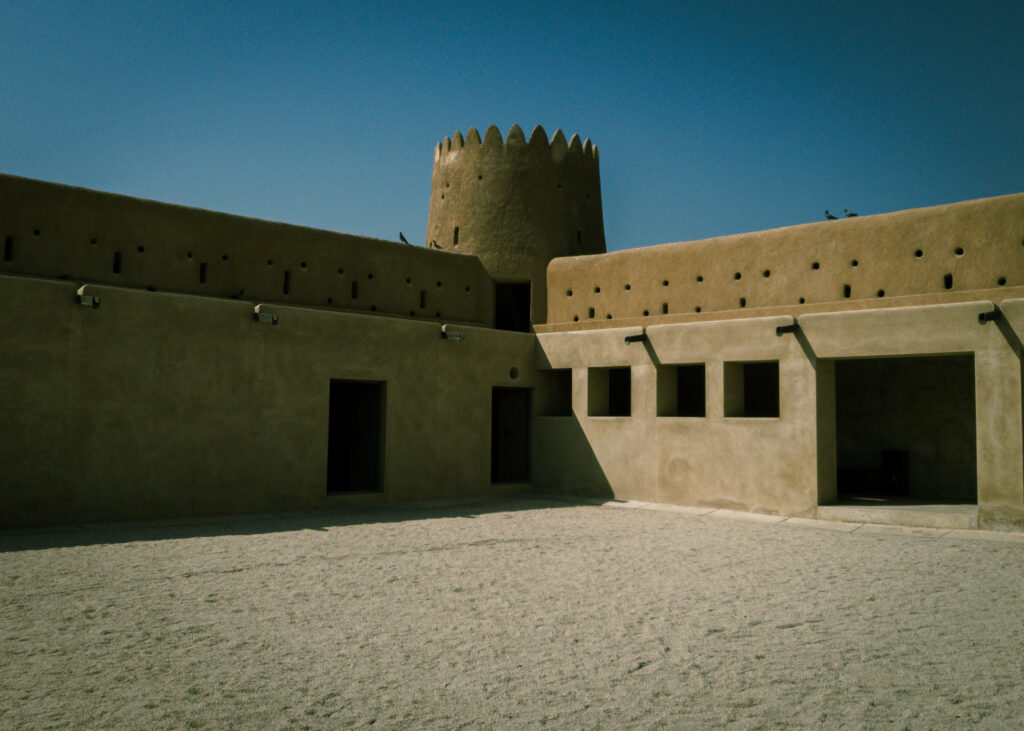 Today, Al Zubara Fort serves as a museum and a famous landmark for all visitors who seek to learn something. The fort is now used to house exhibits, artworks, and other archaeological findings from the nearby Zubarah UNESCO heritage site.

The coastal town of Zubarah in the Persian Gulf was once a thriving area surrounded by fishermen villages that specialized in pearl fishing and also had a functional trading port. It had trading links with much of Arabia and Asia. Now lies destroyed, abandoned as the sands of time have slowly engulfed the town and preserved it. It now stands as a perfect example for us to see how an 18th-19th century trading/merchant town would have looked like. According to the UNESCO website: Al Zubarah is designated as an archaeological site according to the Law of Antiquities no. 2 of 1980, and its amendment, Law no. 23 of 2010. As such, it is legally protected property.

This site which lies 5 minutes away from the fort was also cordoned off to the public when we visited due to the high water levels in the area, but there are very interesting photos available on the UNESCO webpage for anyone to see.

Since the visit to the fort was over sooner than we expected, we decided to hit the nearby abandoned fishermen’s village of Al Areesh. Villages such as this, give us an insight into the lives in this part of the world before the discovery of oil. 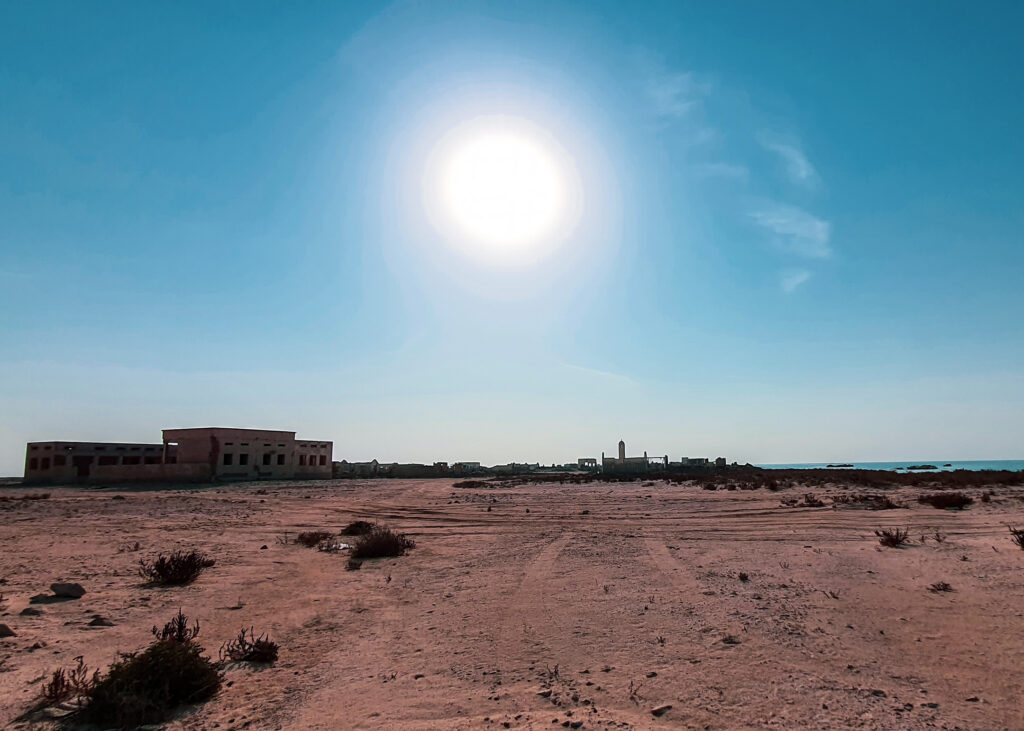 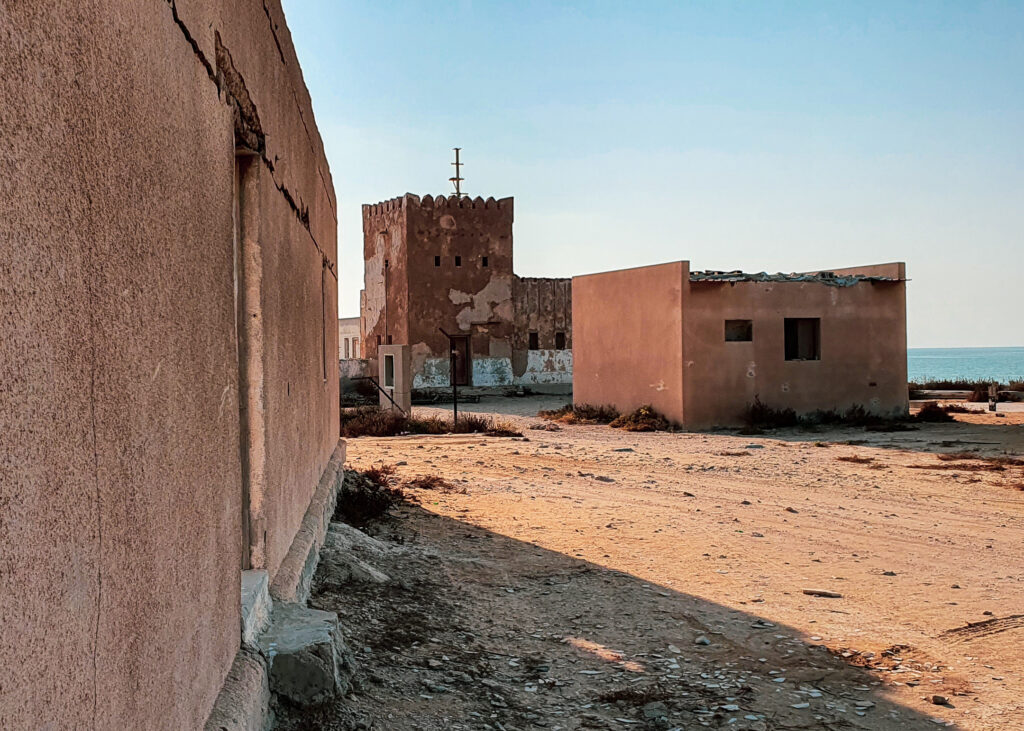 The word ‘Areesh’ in Arabic means ‘Date palm fronds’. I can only imagine, how beautiful this village must have looked when it was busy and thriving, surrounded by those lush and tall date palm trees and the tranquil blue sea in the front. Oh! what a sight to wake up to every morning!

This village too was first abandoned in 1937, but daily life resumed in 1945 and continued well into the 1970s when the residents once again picked up and left. The architecture of the houses here follows a similar pattern of thick limestone and coral walls held together with mud to keep them cool. A minaret of a mosque stands perfectly, in the middle of fallen roofs and walls, as if to say not even time can break the house of God! The presence of a mosque in the heart of the village even back then, says a lot about how the Qatari community’s social structure has always centered around religion and faith and still does. 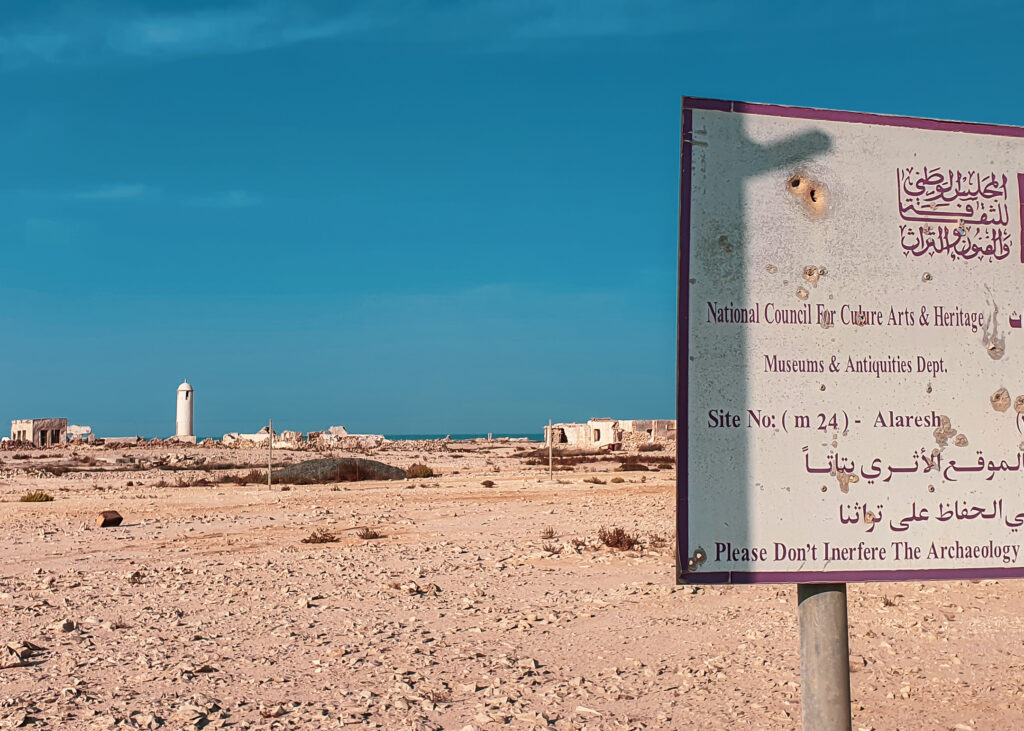 Since you are already at the coast, make sure you enjoy the sea for a while before you head back! 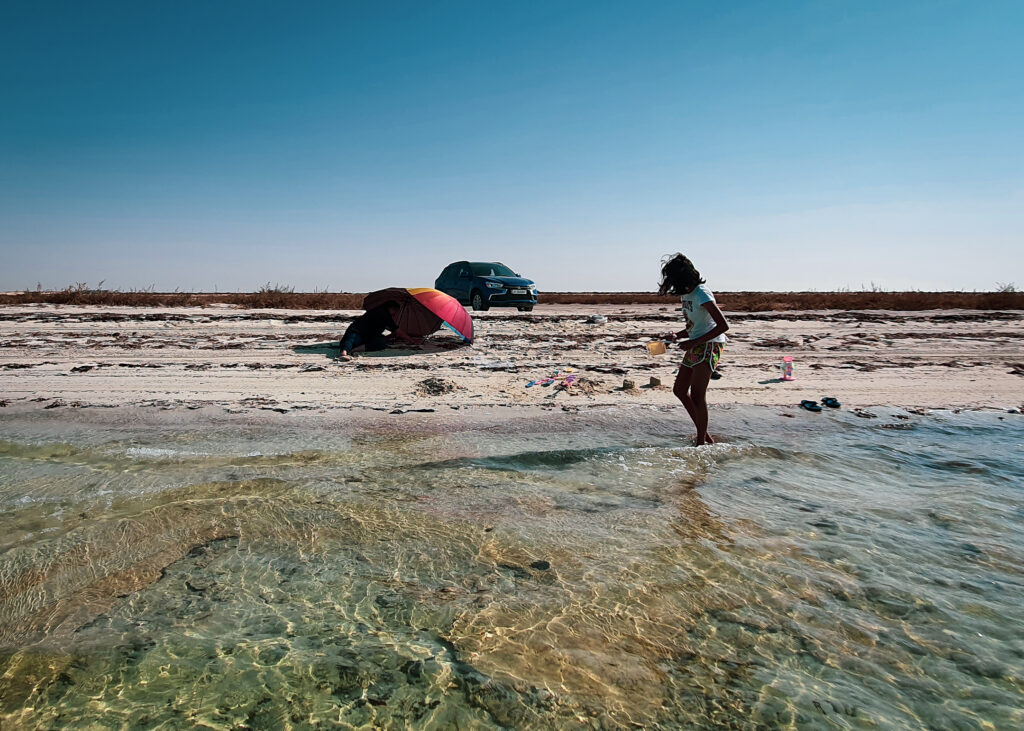 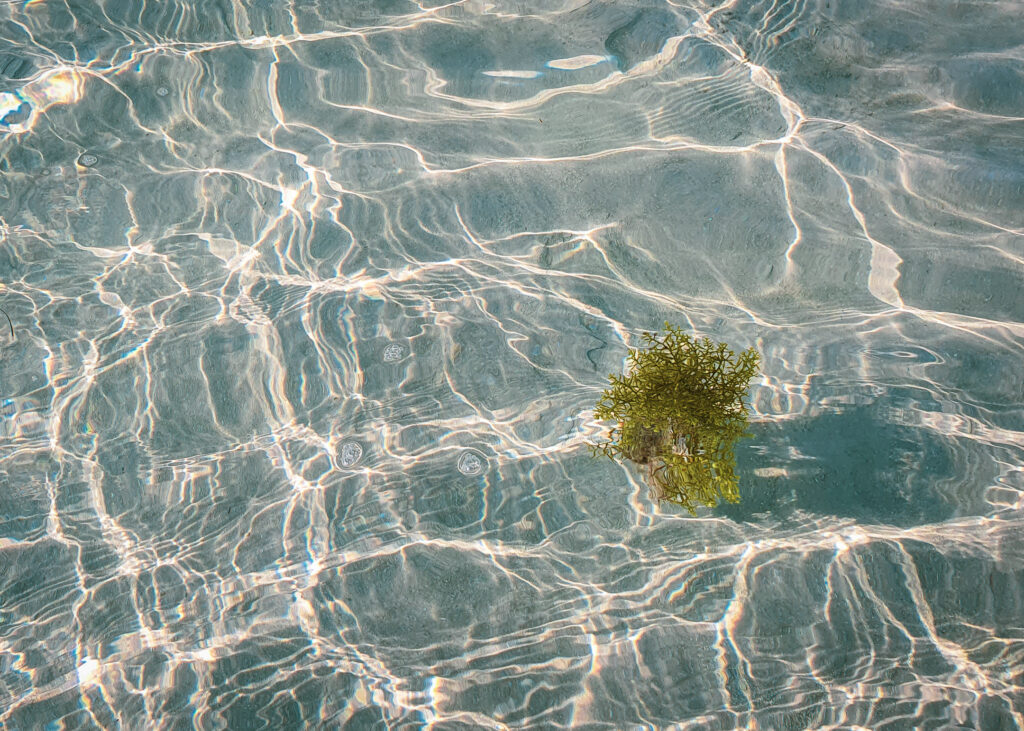