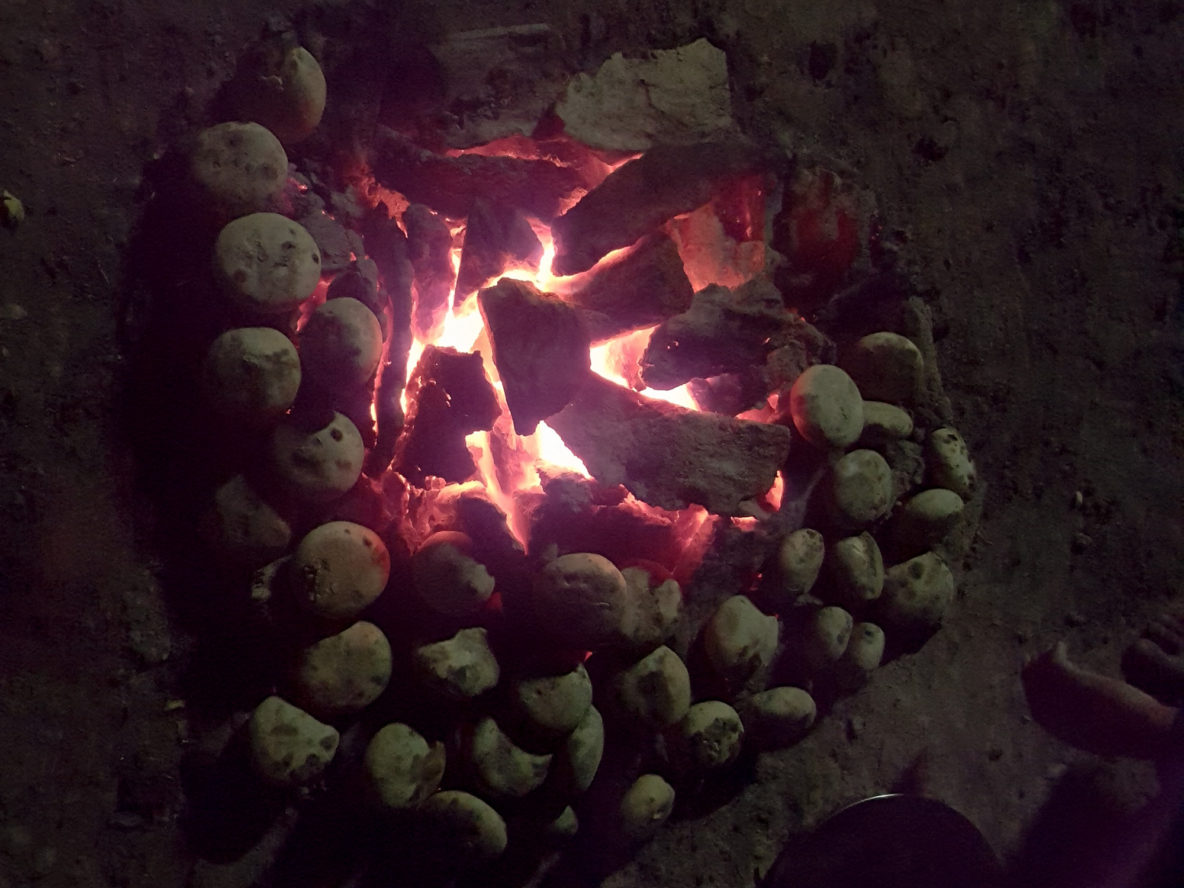 Fresh Baatis waiting to be sold. These are cooked on a charcoal grill and sold almost everywhere

The boys selling Baati chokha in their carts

It’s been a year since I visited Varanasi and this experience will remain close to my heart for a very long time.

My cousin must have somehow sensed that I might be interested in knowing more about this product. He put me in touch with Krishna who’s a master of Baati Chokha. Straight away Krishna invited us to dinner and gladly agreed to show me how he made his version.

Krishna explained that the Baati Chokas are basically from Bihar and that biharis brought it to Varanasi long time ago.

It was around 6:30 pm and all the ingredients were ready and kept on an iron table. He smiled and with a very polite tone asked”Shall we begin?”As always the chef in me was mentally sharpening my knives. Super excited would be an understatement.

So, as I tried to spot the kitchen, I realised we were going to cook in the open space besides his house. Fantastic!

It was pretty dark and the only source of light was a fluorescent bulb. We were accompanied by mosquitoes. Lots and lots of mosquitoes.

The beauty of any rural Indian cooking is that its solely by instinct and there are no set rules.

Let’s start with the filling/Sattu. 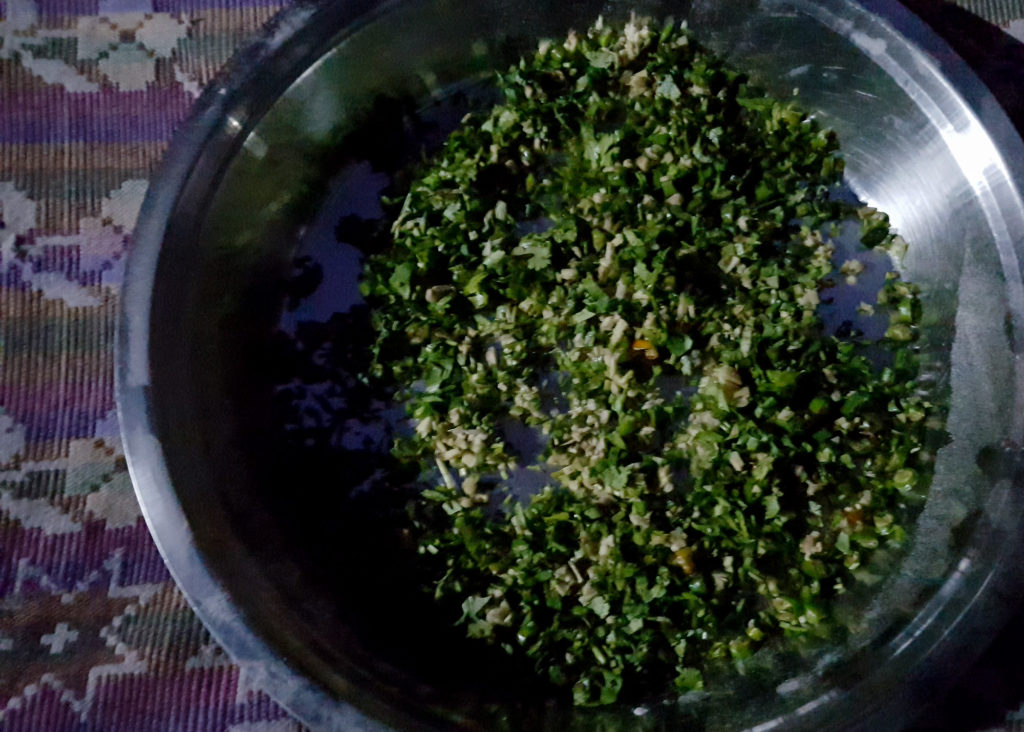 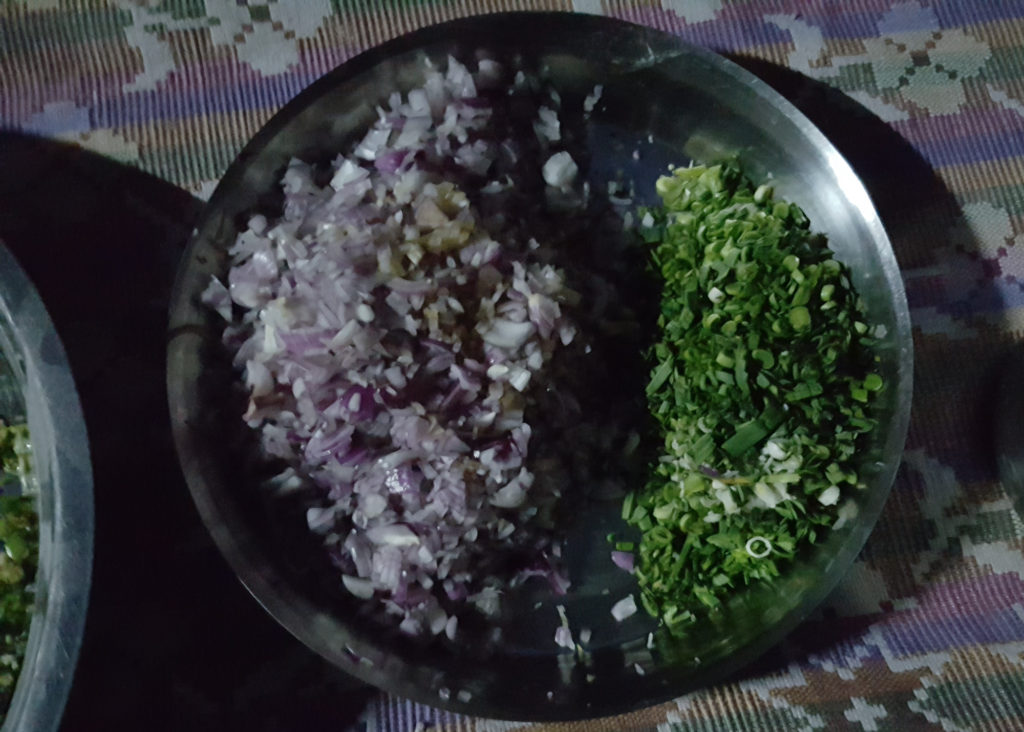 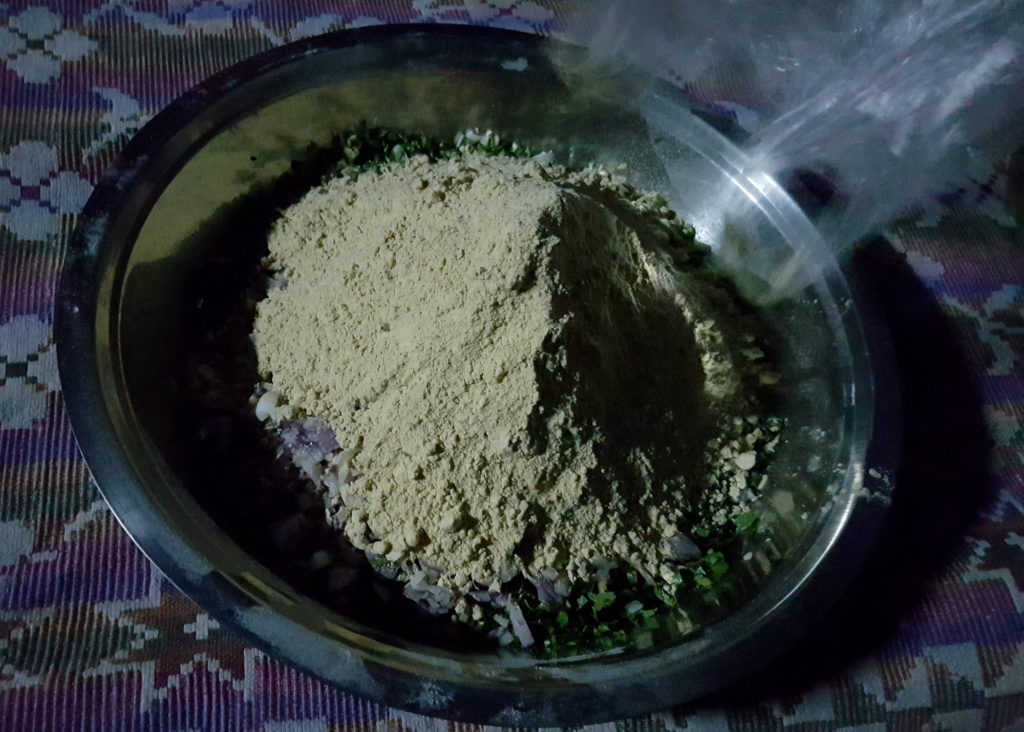 Sattu flour/gram flour is added to the prepared veggies 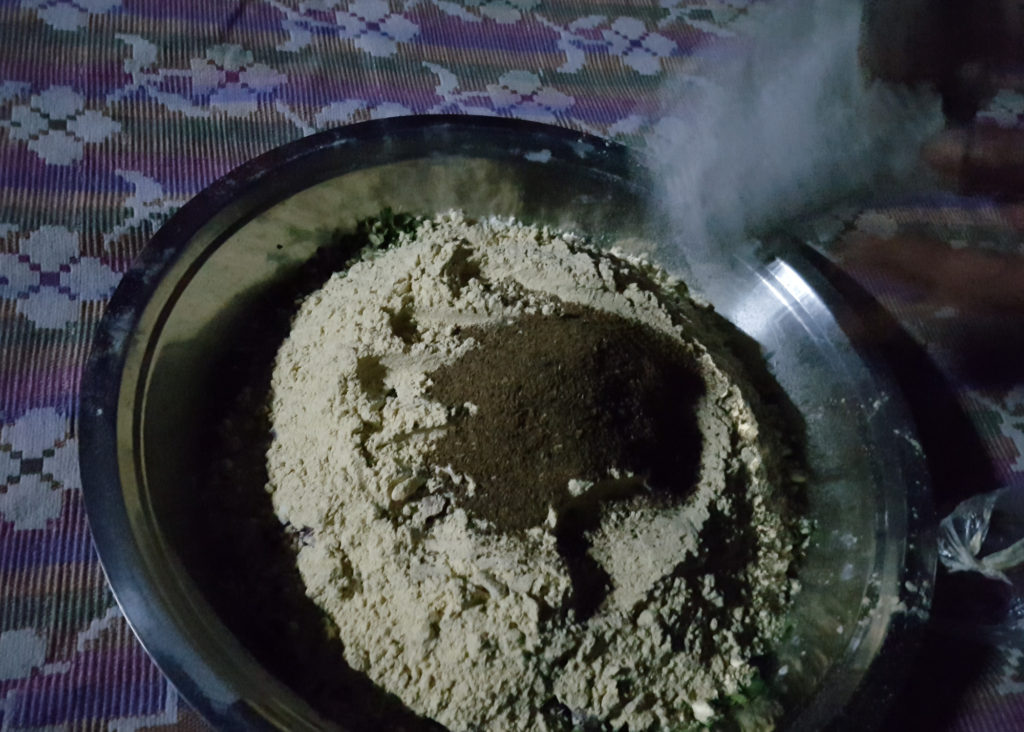 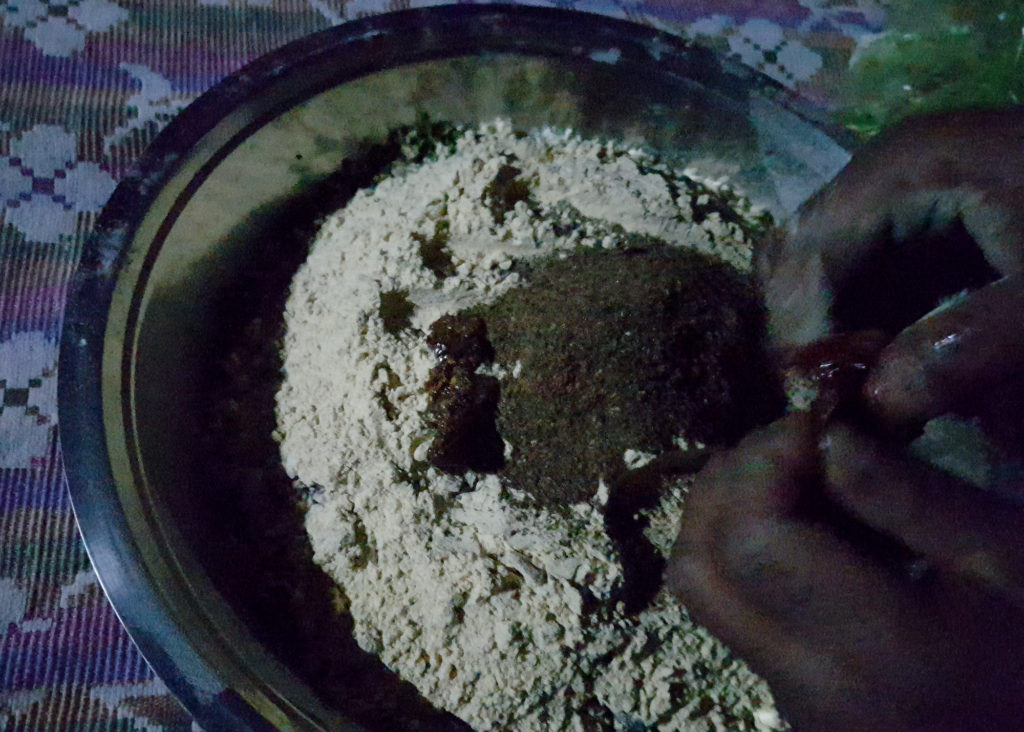 Pickled red chillies are peeled and added to the mix. I found this ingredient really interesting as it was tangy, salty and spicy at same time 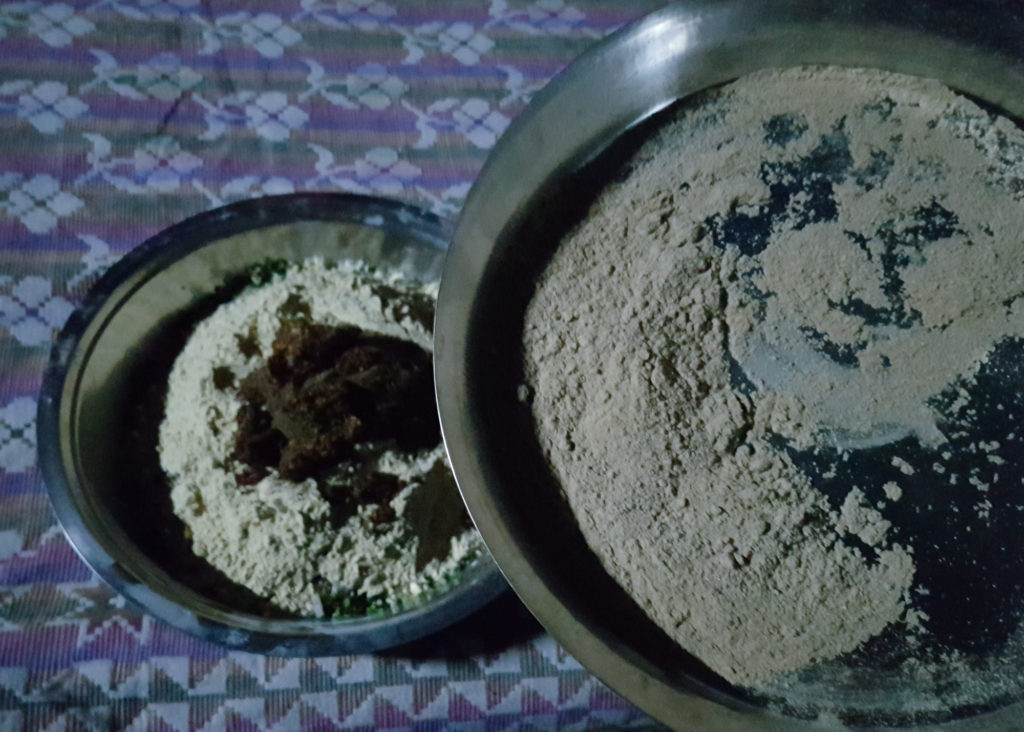 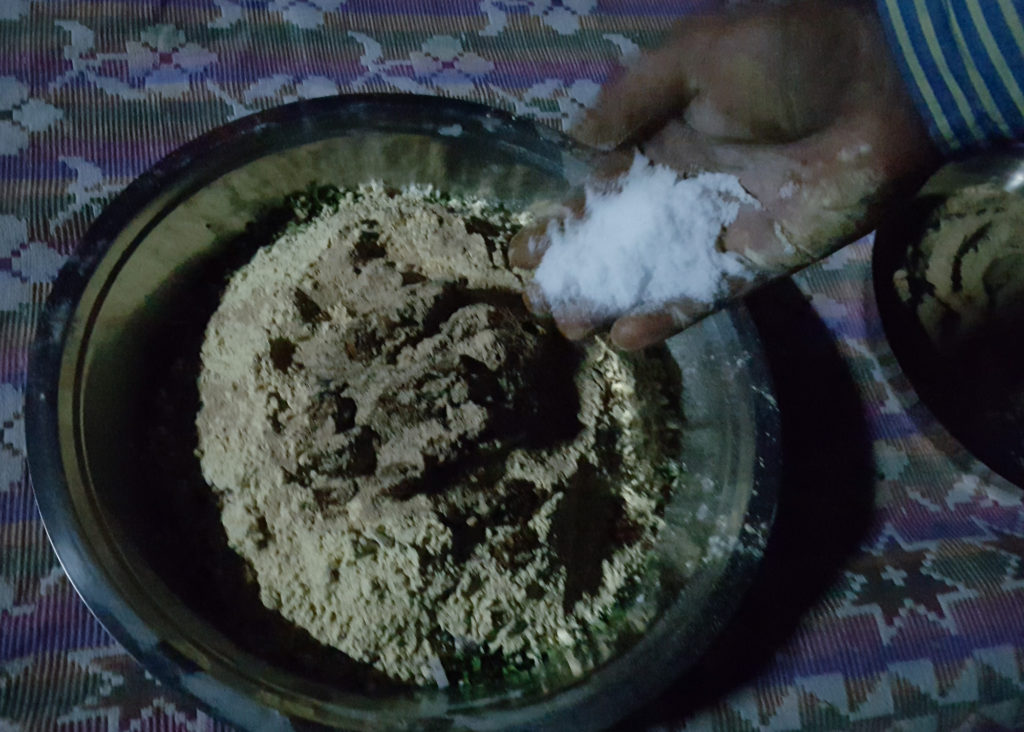 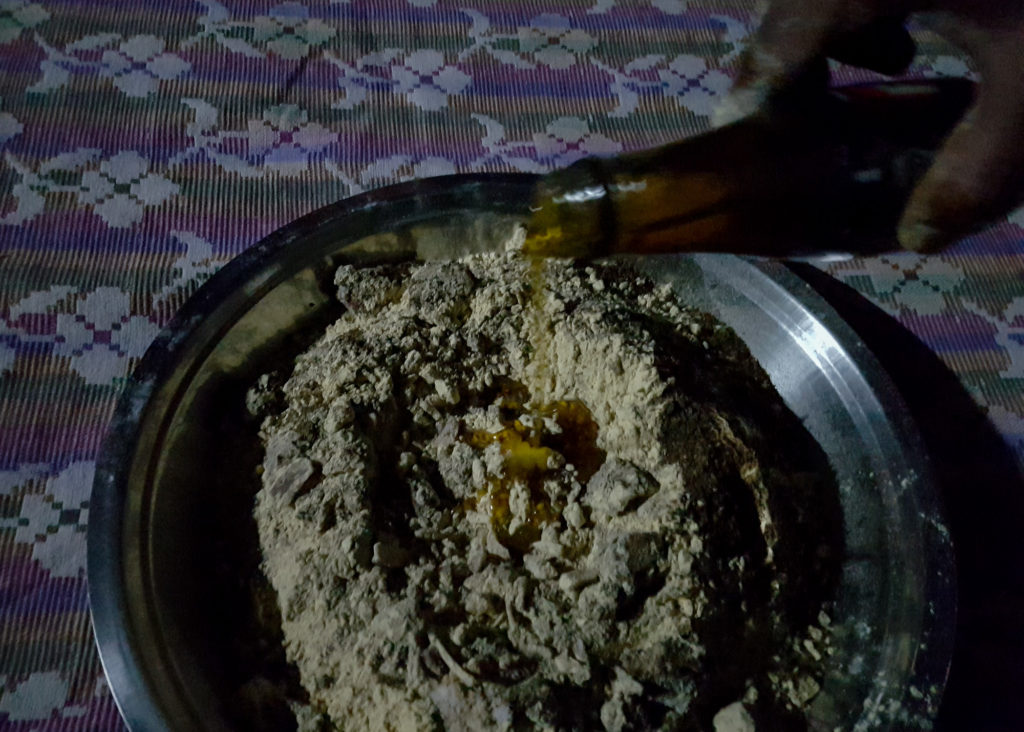 Mustard oil – just enough to bind all the ingredients 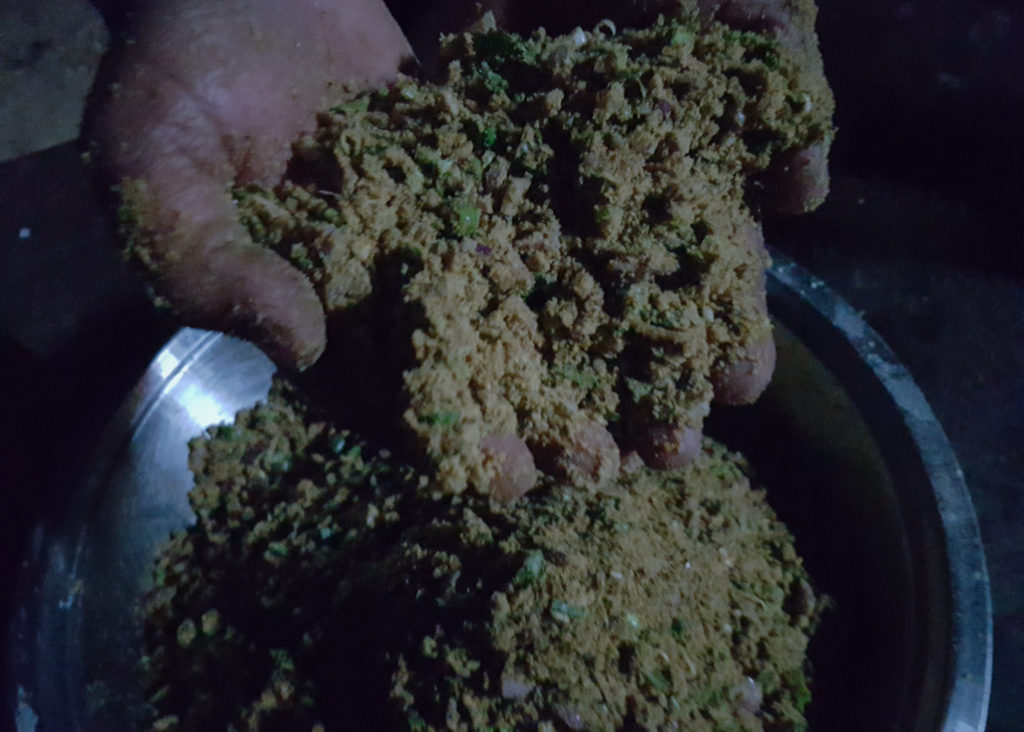 All these ingredients are combined together to form a semi-dry filling. A crumble like consistency for all the chefs out there 🙂

The filling is now ready and I was offered to taste. I found it to be a bit salty and immediately raised it to Krishna. He tasted it, (I thought he will add some flour to adjust the salt.) Instead, he replied not to worry- with his signature smile. He has been making this since childhood and who was I to doubt his judgement?

We went ahead to make the dough.

This was a pretty straight forward whole wheat flour+water kneaded well to a firm dough,then allowed to rest. 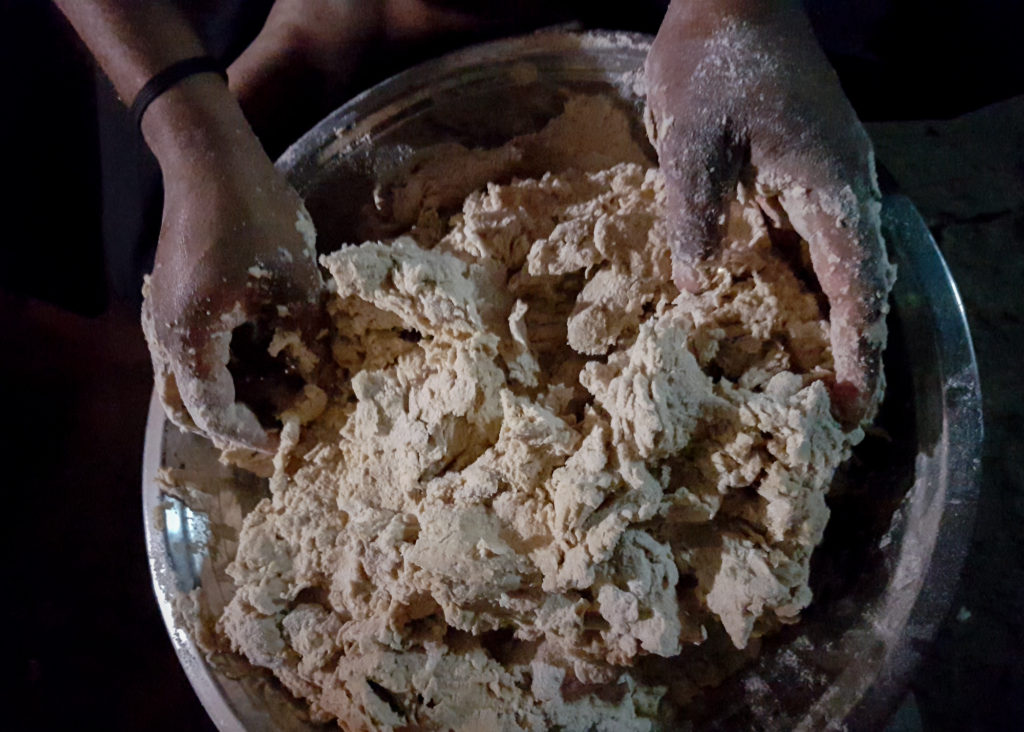 ‘Now we have the filling and the dough ready’:). I was expecting Krishna to bring some charcoal and a grill because that’s how I have seen the street vendors sell them. To my surprise, he brought 30 to 40 dried cow dung cakes. 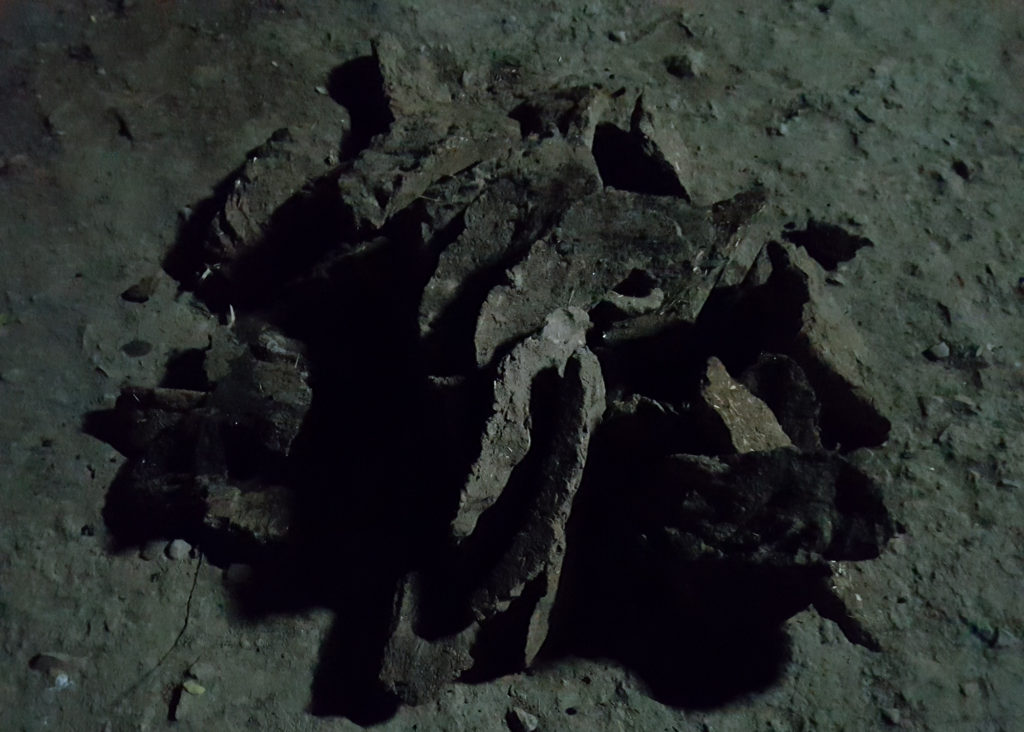 He then picked 3 pieces, lit them with a matchstick. 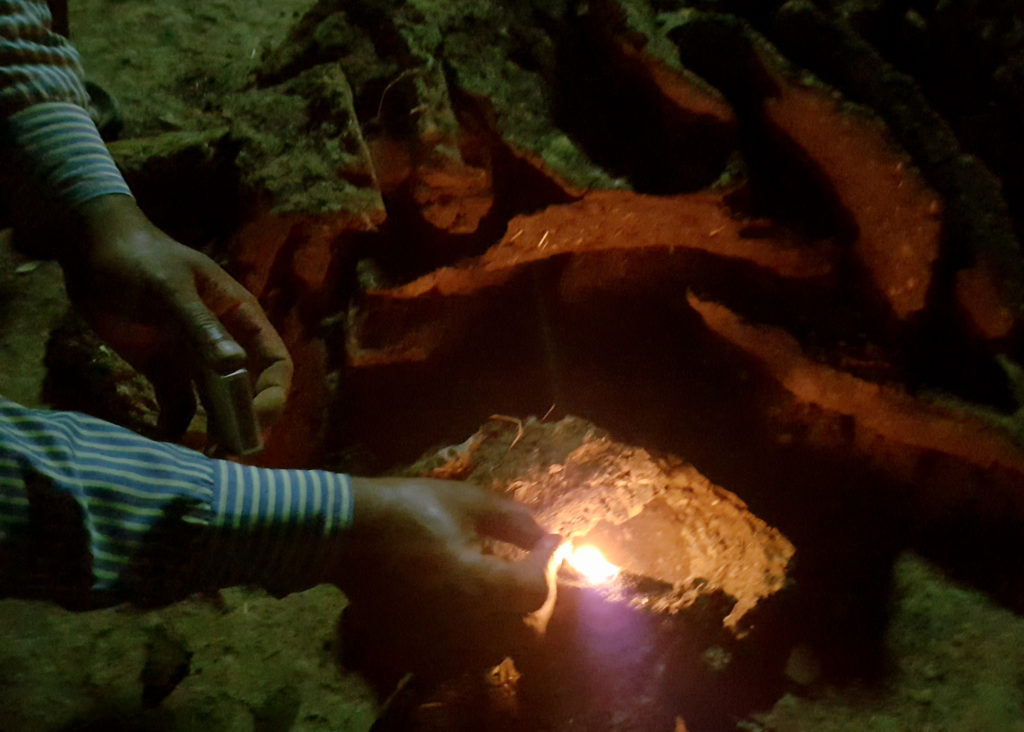 let there be fire

One of the dung cake finally caught fire after a few attempts. He carefully stacked more cow dung on top to form a pyramid. There was a lot of smoke. Krishna said – ‘now there won’t be any more mosquitoes’. And he was right. He also explained that Baati choka is usually cooked during the winters as the fire helps to keep them warm. Our ancestors always knew how to use the available (limited) resources wisely.

When there was a substantial amount of fire he got the vegetables to prepare the Chokha. 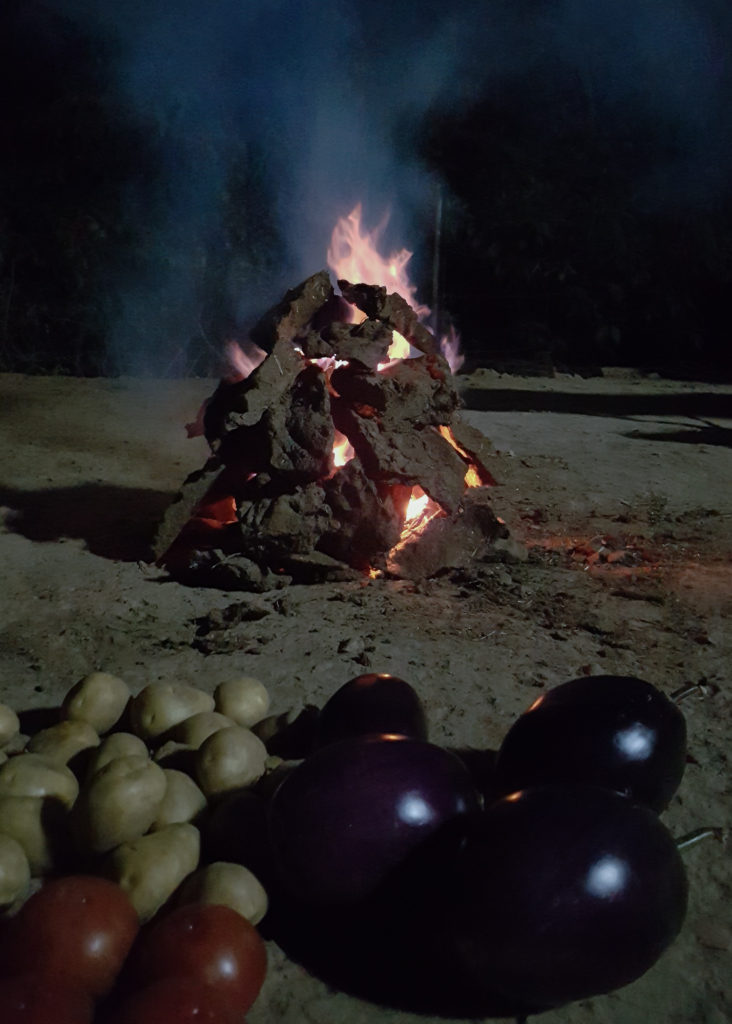 First, we placed the potatoes on the fire followed by tomatoes and eggplants. While waiting for the veggies to cook I sneaked in a selfie 🙂 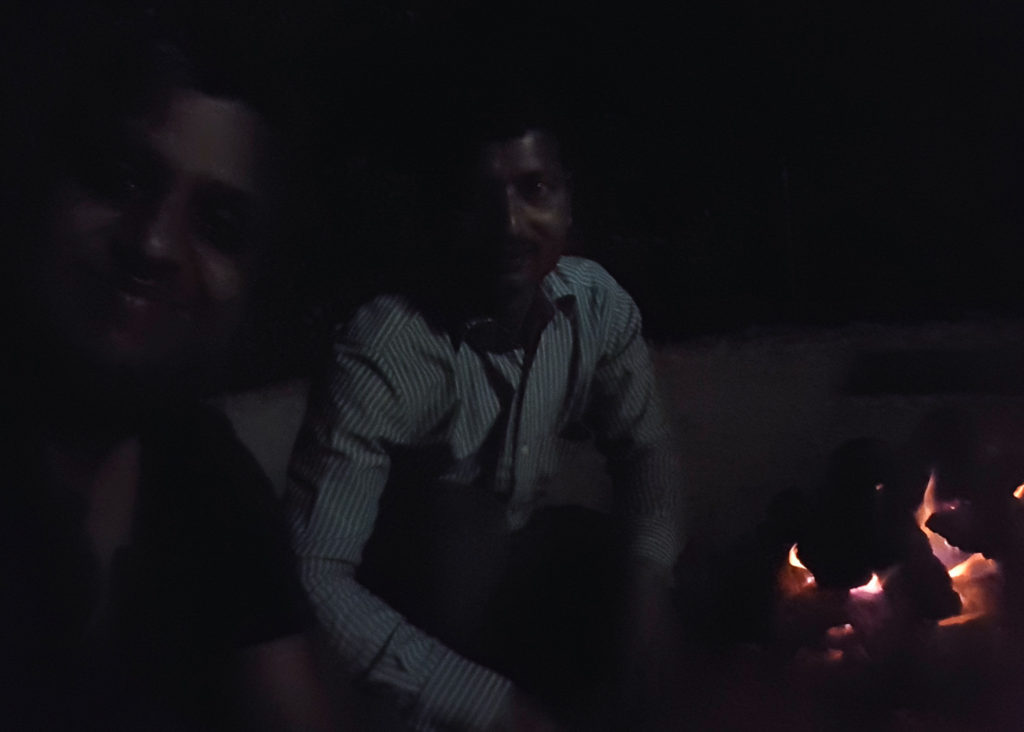 After few minutes the eggplants were gently pulled out along with the tomatoes. They were super soft with charred skin.

The plate with cooked vegetables was handed over to the ladies inside the house. They peeled and mashed the vegetables and added more ginger, garlic and seasonings 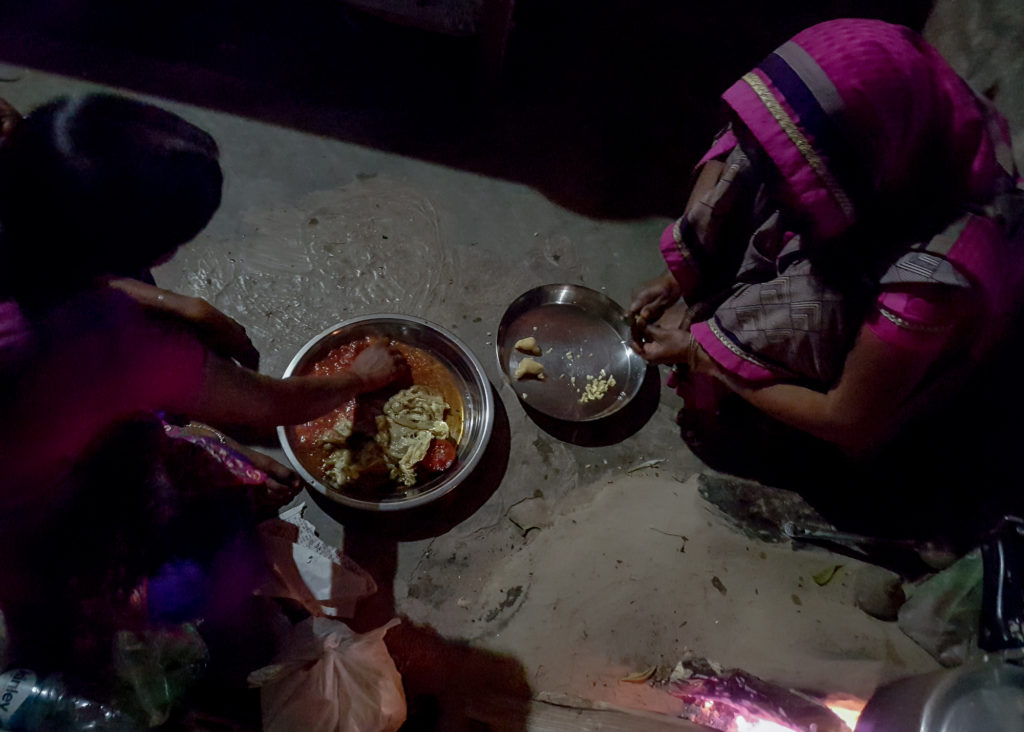 We started to fill the dough.

The key to making a perfect Baati

I was warned that this is one of the most important steps of making Baati. If the dough is not properly sealed it will break when cooked in the fire and all the fillings will come out. I made the first baati after watching him and he wasn’t satisfied. I could see that in his look. Even though he was not completely happy with my Baatis he encouraged me to make few more, then he said I will be served only the Baatis I made. 🙂

By this time Krishna’s  friend joined us which accelerated the Baati production. 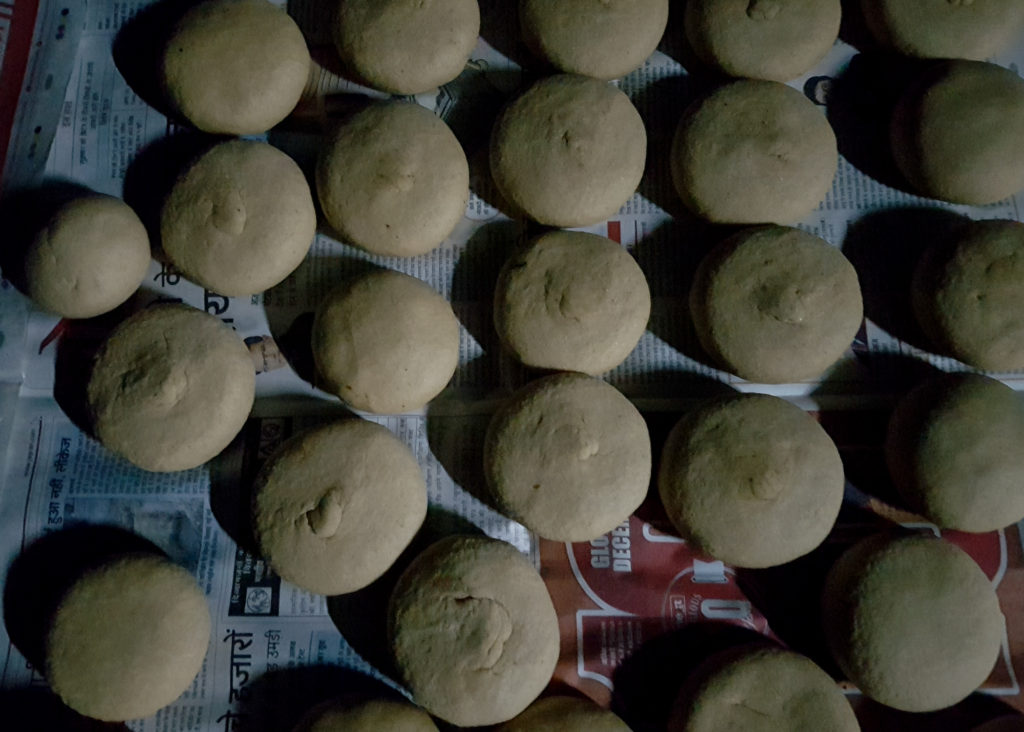 the Baattis with an amateur finish must have been made by me. 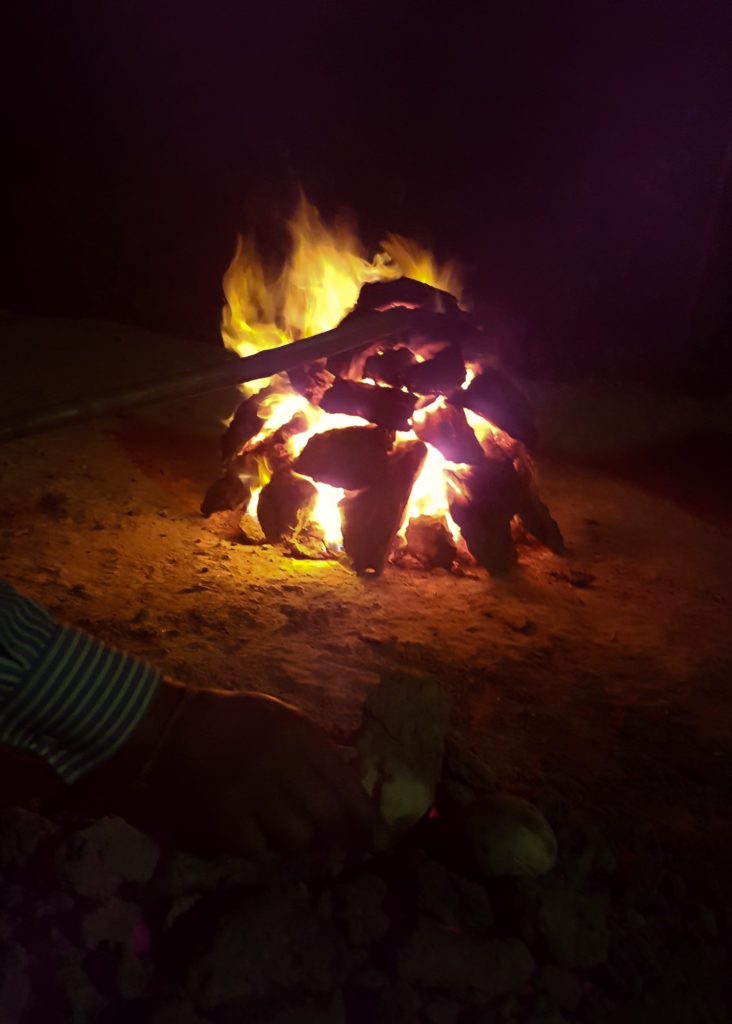 Let us not forget the potatoes

As soon as all the potatoes were all removed from the fire it was handed over to the ladies. Then the pyramid was flattened slightly to create a bigger circle. 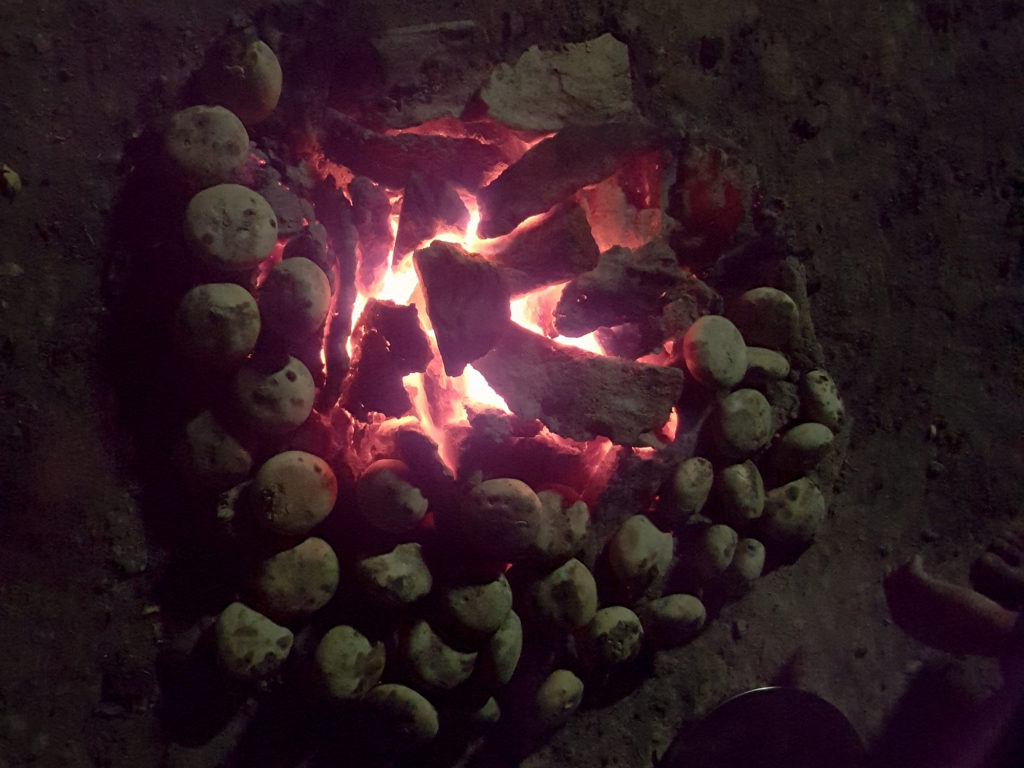 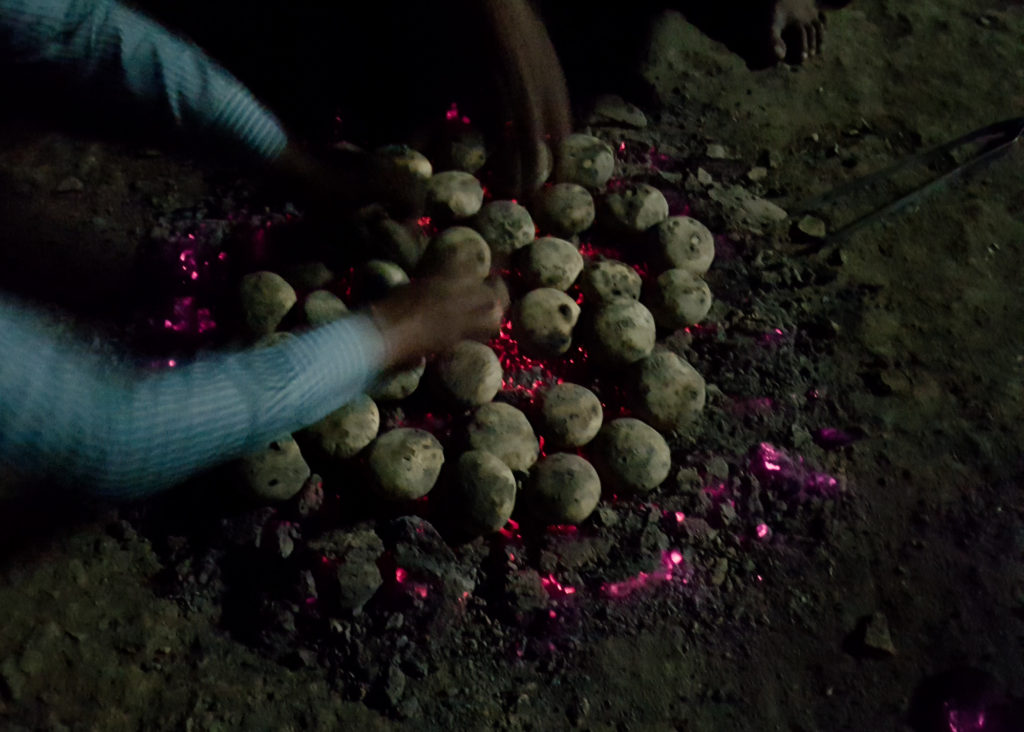 The cow dung is now completely flattened and the Battis are carefully turned each side to achieve even baking. 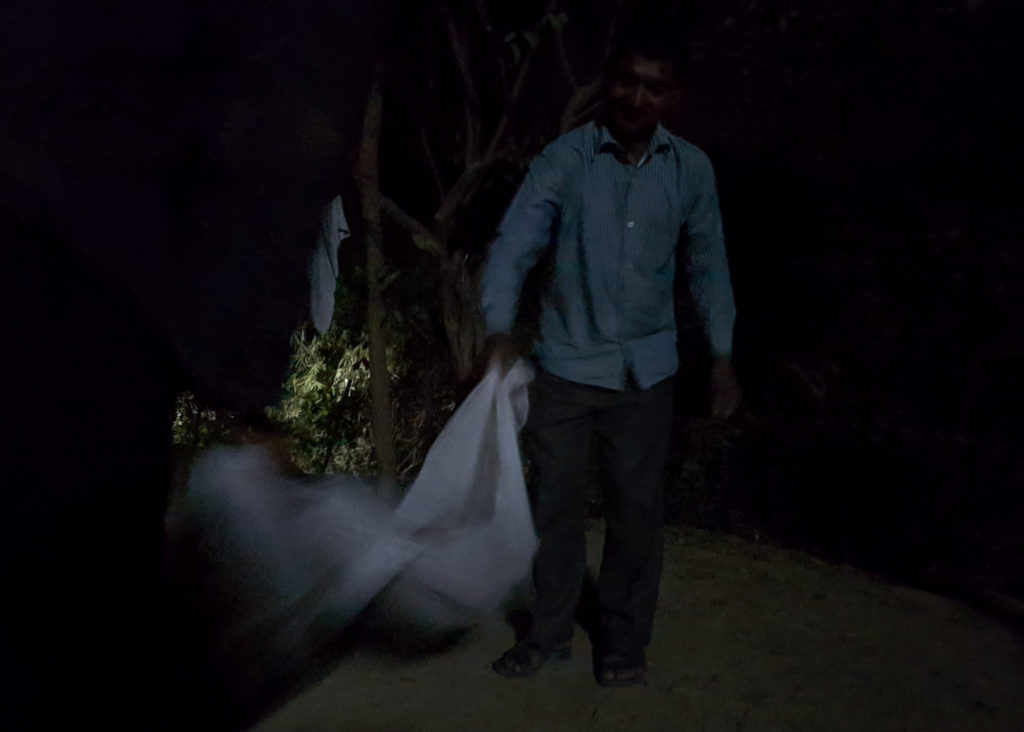 Once the Battis are completely cooked they are collected in a clean Dothi (long cloth) and spun vigorously. The spinning motion separated all the ashes and other particles which was stuck on the surface of the Baatis.

In the meantime, a vessel with pure desi ghee(clarified butter) was kept on the hot cow dung to melt which was to be applied on the baatis and drizzled on top of the dal. The cow that gave the dung to use as fuel was probably the one that gave them the milk to make the ghee. 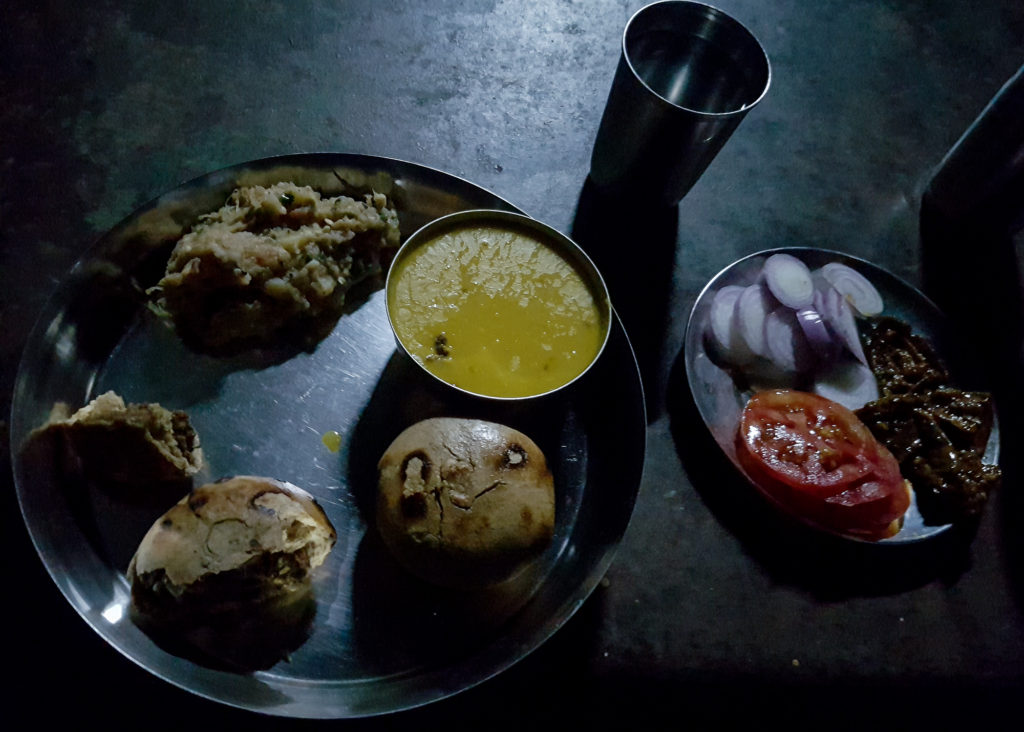 The plate was served with two Baati, Chokha, dal  along with sliced tomatoes, onions and pickled red chillies. Do I have to mention how divine they tasted all together? Simple yet hearty. The whole meal was a result of teamwork of the men and women in the family, of how everything was so organised and deep knowledge of each component going into the meal. Above all the hospitality was mind blowing. This dinner gave me a whole new definition for the term “comfort food”

Initially, I thought I was going to learn a simple Baati Chokha recipe that night. But the three hours spent with Krishna and his family gave an insight into their culture and values. Allowing a stranger into your home and accepting him is only possible for people with the kindest of hearts for which I will be ever so grateful. 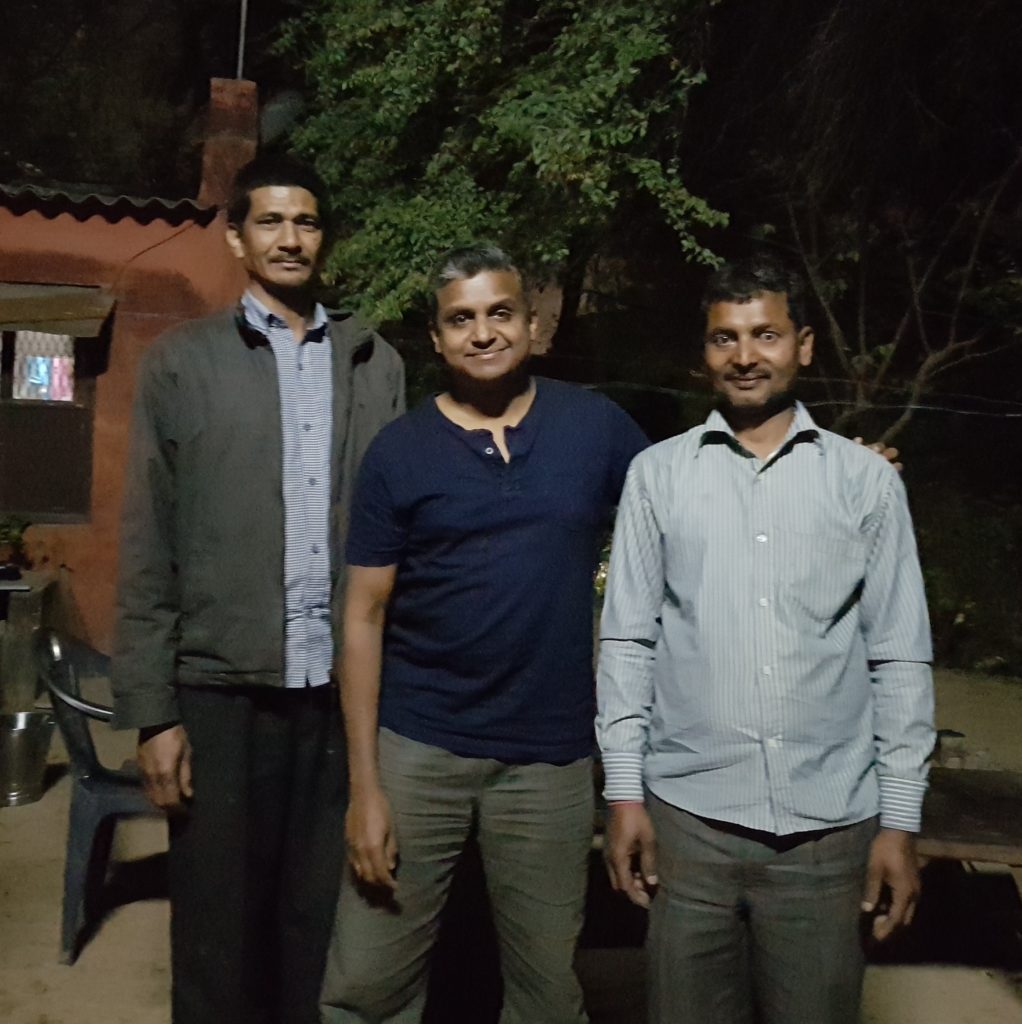 Finally the customary pic…me with the masterchef