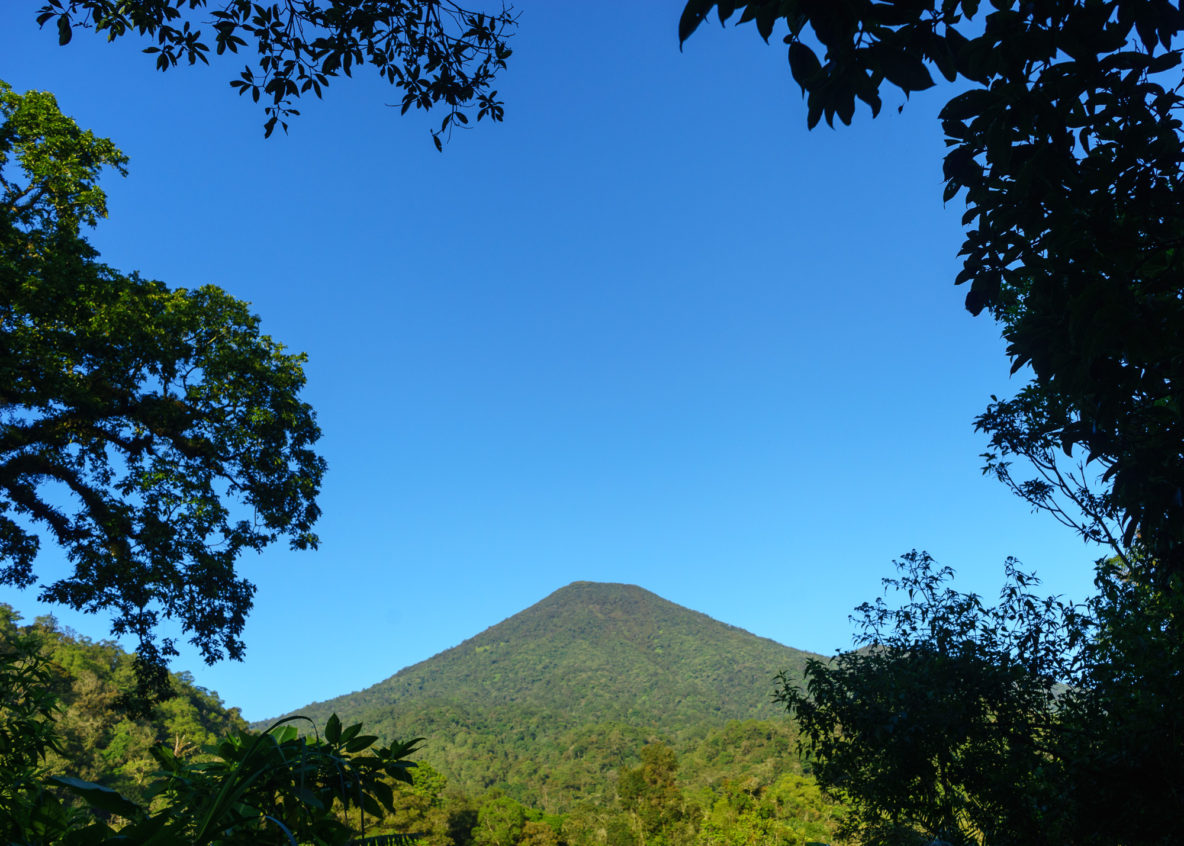 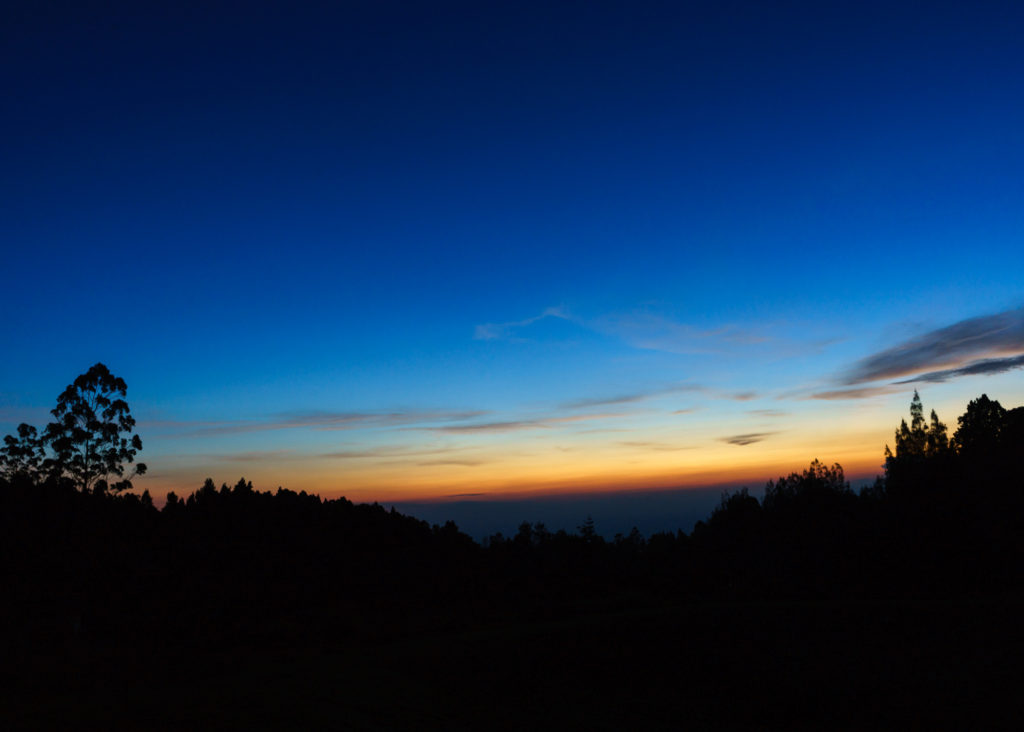 When you wake up to this view after a long wonderful journey, one couldn’t have asked for a better start.

As planned the local guide Kaman arrived at the tent to pick me up. Grabbed the energy bars, and water bottles stuffed them in all the pockets available on me. I didn’t want to carry anything else except my camera bag and tripod, since with my previous experiences I knew the weight will play a major part at the end of the hike.

I was all set to climb to the peak of the active volcano – Gunung Gede. Kaman spoke little English but he smiled a lot during the conversation which filled me with colossal confidence. He gave me an overview of how long the hike will take and few tips. He also works as a porter and knows these mountains inside out.

The moment I stepped into the Gunung Gede national park I knew this would be different as I  was welcomed by thick rainforest, extreme humidity, buzzing noise of insects and chirp of birds. Within a few kilometres, we reached Telaga Biru lake which was camouflaged. The lake was mesmerising as it changes colour to blue or even red according to the algae and I happened to witness the greener version. 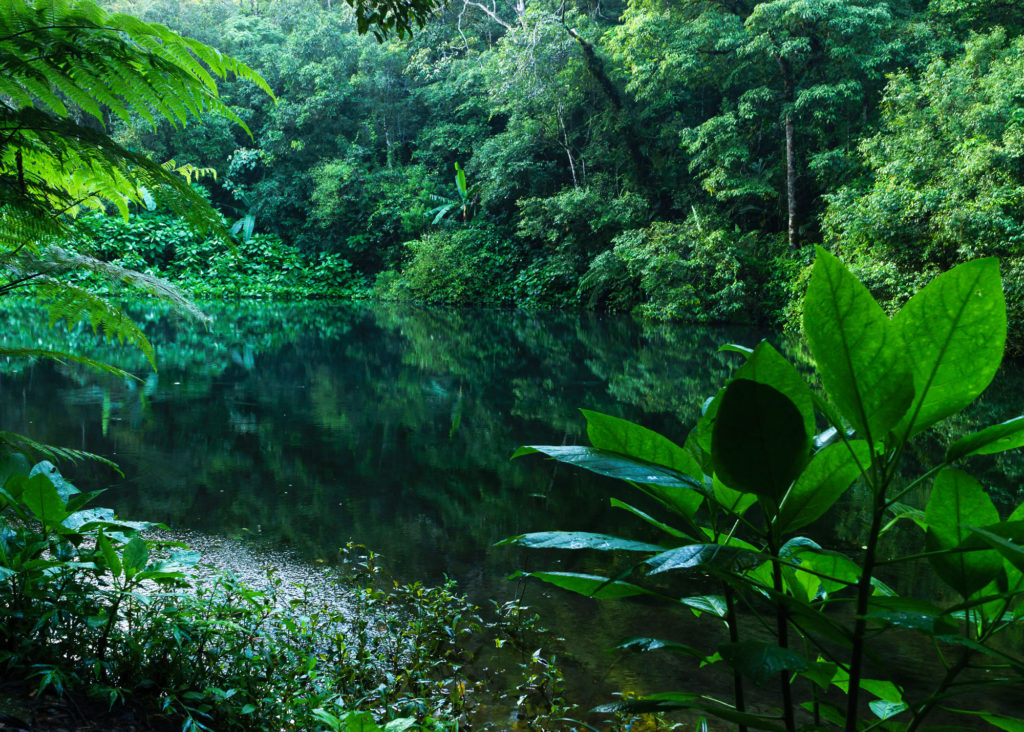 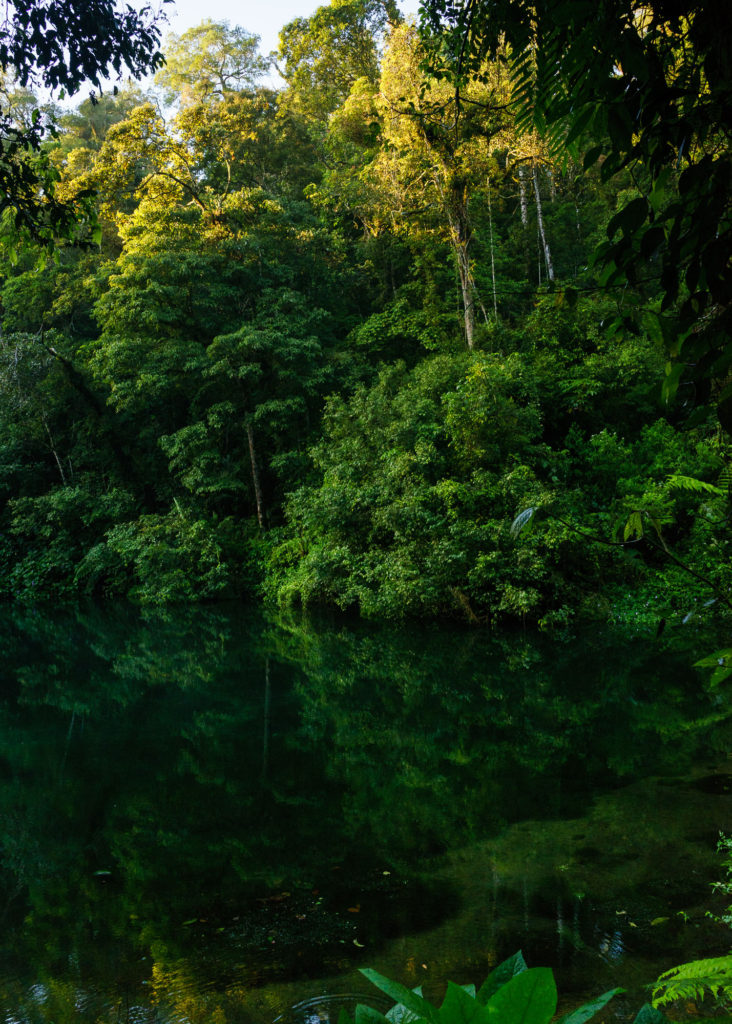 As soon as we passed the lake the landscape opened up to a marshy reservoir with dense grass and wild banana trees. 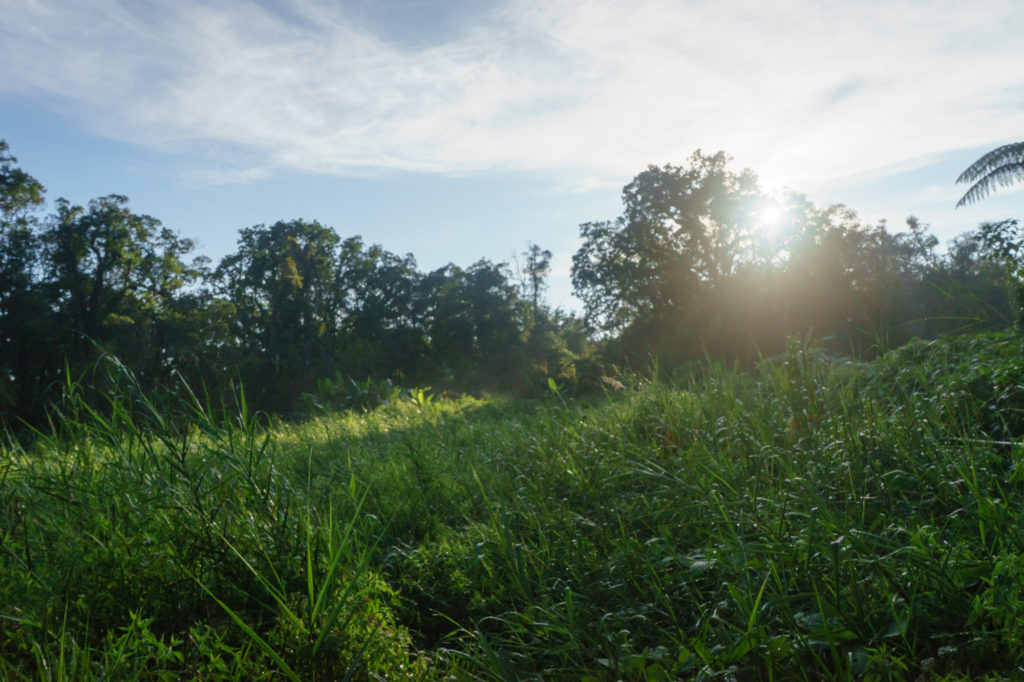 This is where I got the first proper glimpse of Mt. Pangrango and met some local kids who were super friendly that ended up in a photo session. After transferring the picture to their phones the kids decided to let us go 🙂 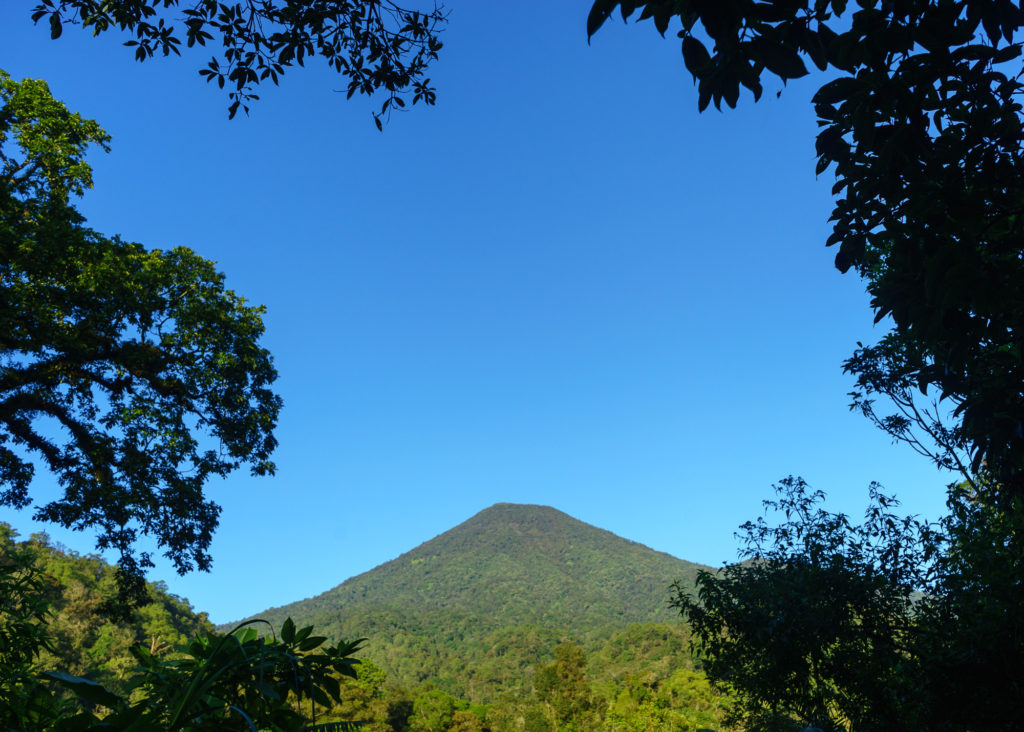 Anxiously walking through the marshlands and poorly maintained walkway we arrived at Cibeureum Falls. I was awestruck by the sheer size and number of falls in one place 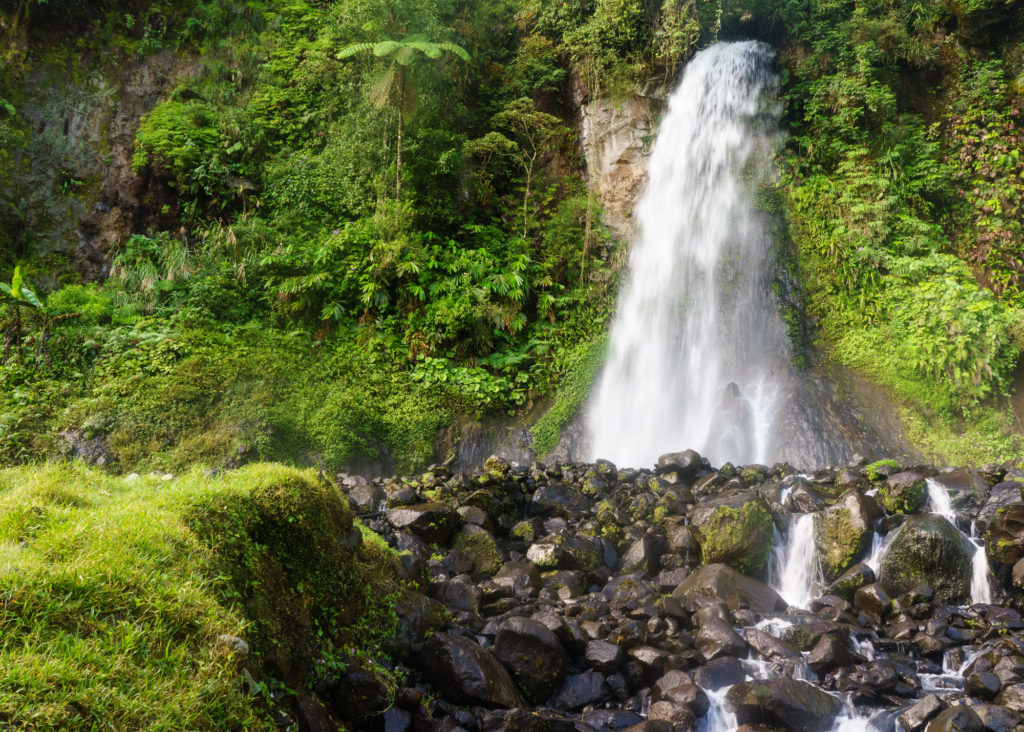 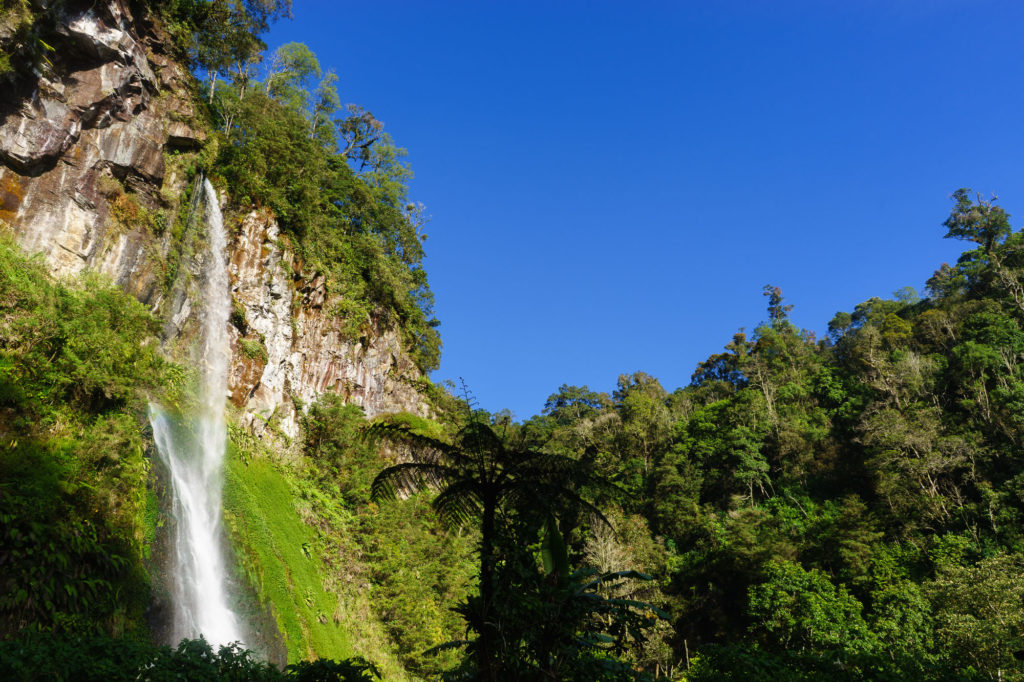 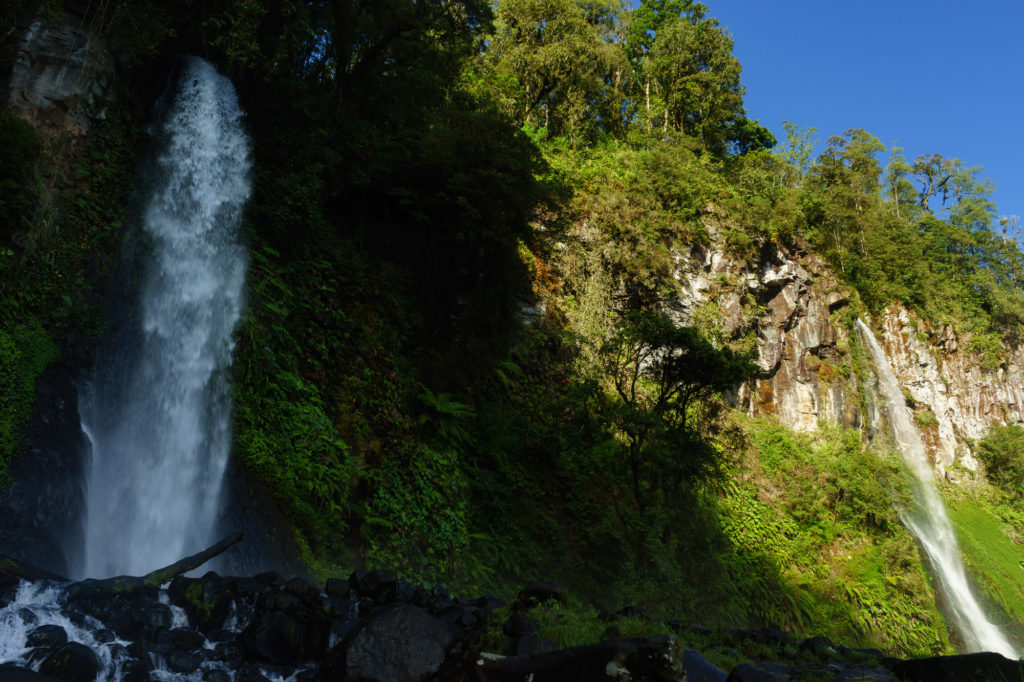 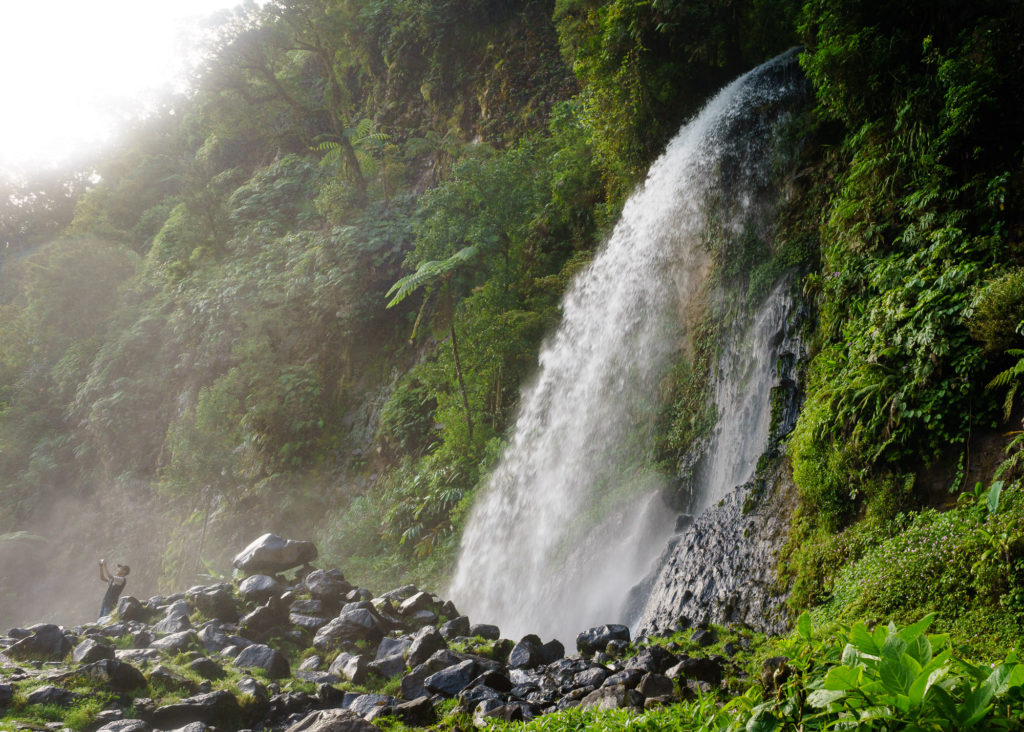 And a selfie of course

I couldn’t believe all this happened within the first 2 hours of the hike. After spending a good 30 mins around the falls we began our hike again. Kaman commented it was going to be more challenging from then with his signature smile and I was clueless with regards to what to expect.

The ascent was starting to getting steeper and slippery. I started to get the taste of the challenge. We took regular breaks along the hike allowing me to take pictures and catch my breath. Kaman had a surprise in his backpack- a big bag of homemade Indonesian biscuits and savoury bites made by his wife for EID  (kicking myself for not taking any pictures).They were simply delicious. 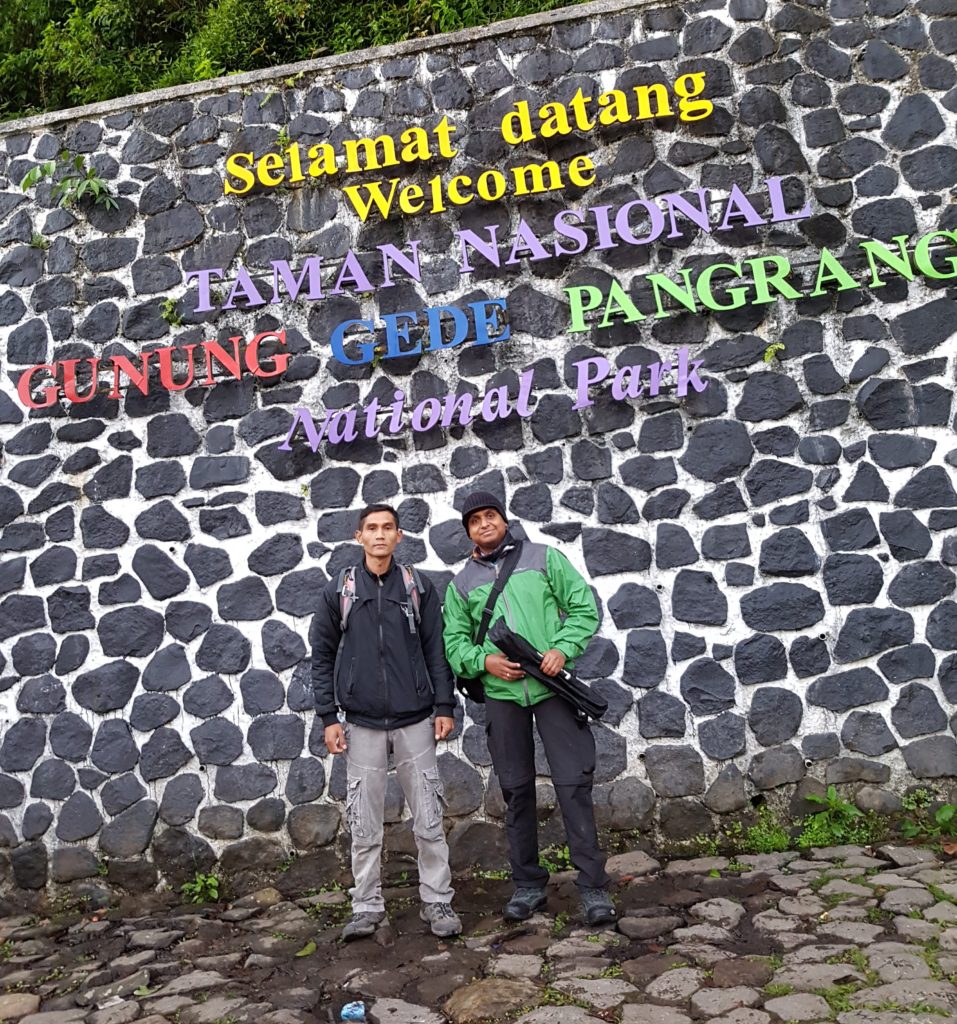 After around 3 to 4 Km the whole jungle transformed into one big sauna. The steam in the air was way too heavy and there was a gigantic hot waterfall. I have seen little hot water springs but this was no match. Piping hot water was gushing down at full speed. Kaman told me the trekkers boil eggs in this water. 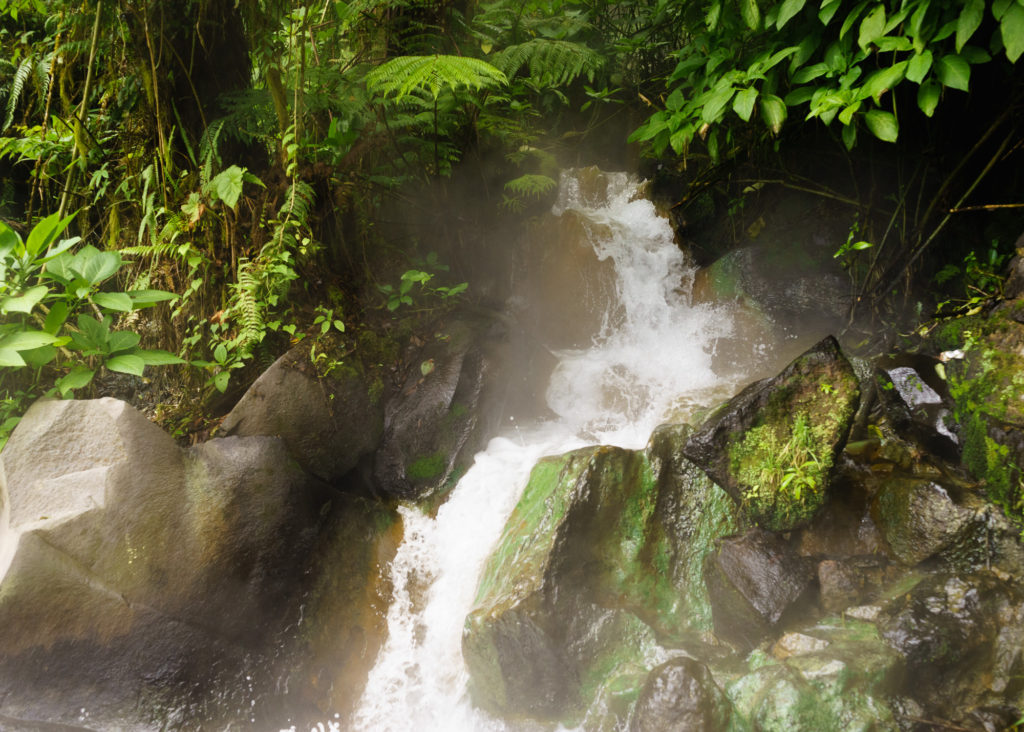 We continued the hike, but now Kaman suggested that we climb up using a rope, and that would save us 20 mins of our hike time. I found it interesting and decided to  give it a go. A bit difficult than I expected to be honest. Kaman mentioned he is used to carrying more than 25 KGs on his back and climb up when he is assigned to porter duty. 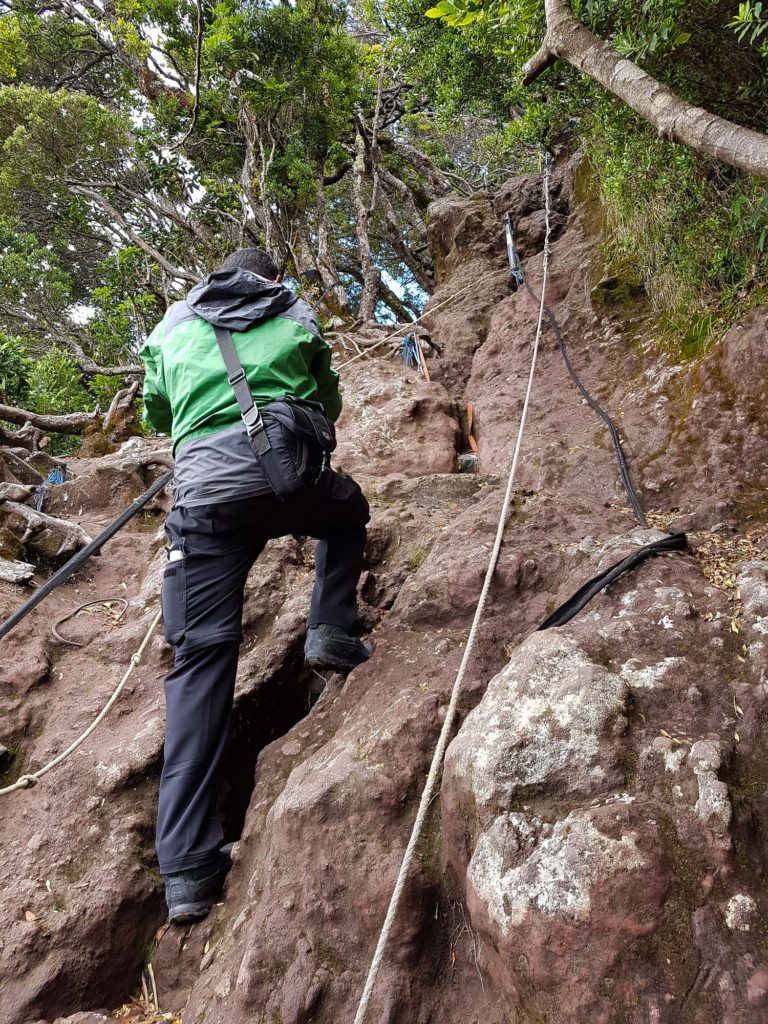 It was almost more than 5 hrs of hiking and I could feel my energy level dropping with each every step. It was starting to get harder and harder. Slowly but surely I could sense a foul rotten egg smell from the fumes -it was an indication of nearing the volcano.

Finally, we reached the summit and all I could see was just the outline of the mount Parangano. It was so cloudy that the visibility levels were low and chances of seeing the volcanoes were slim. Disappointed with the luck we decided to take a 45min break before we head down. I wanted more than 45 min to get myself up(usually, people hike up and camp overnight at the summit before they descend). 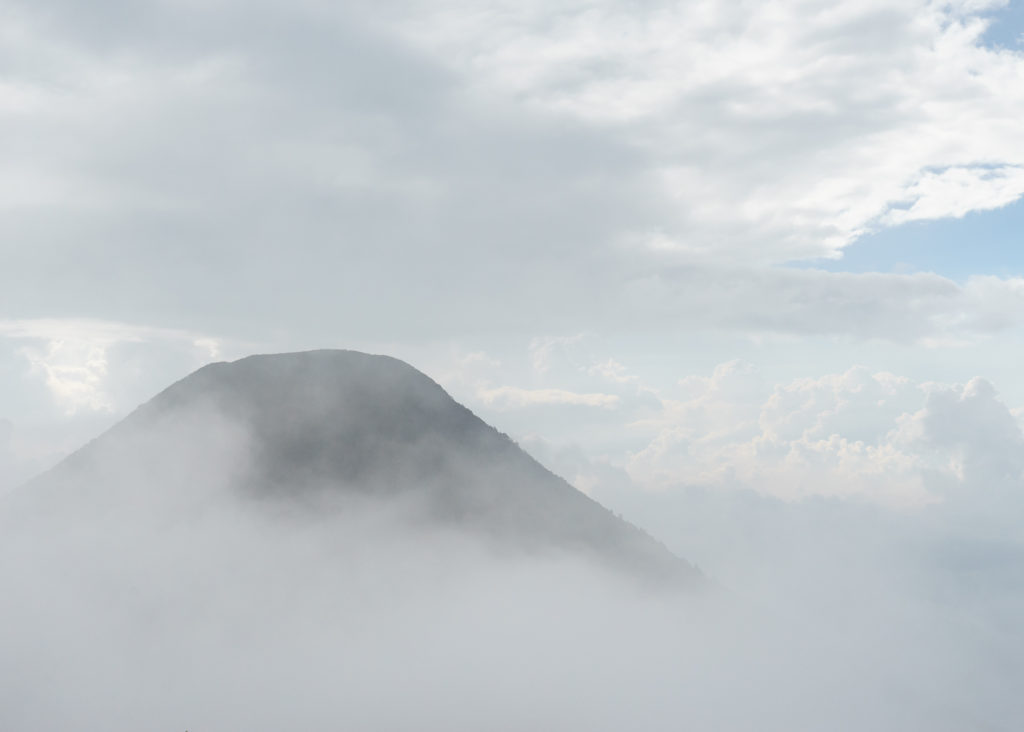 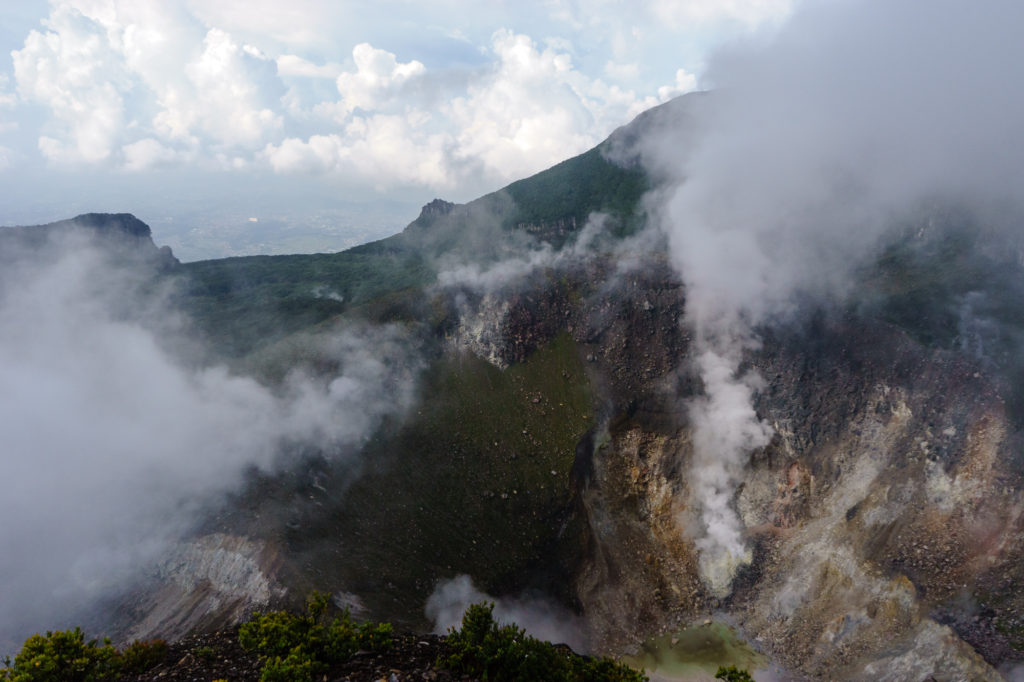 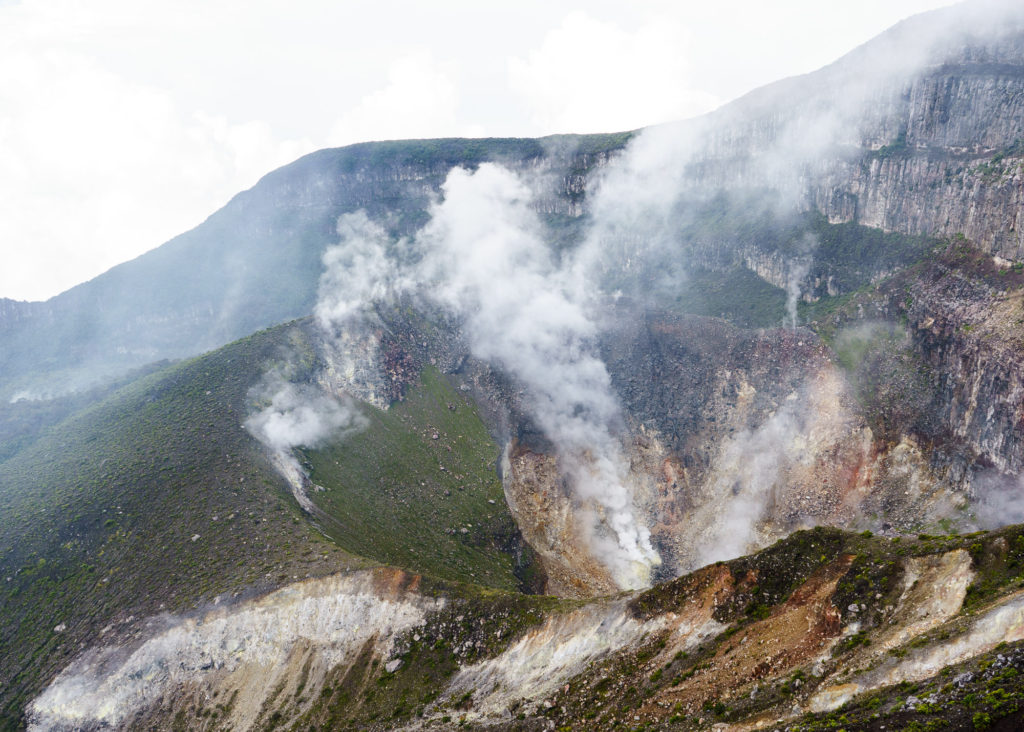 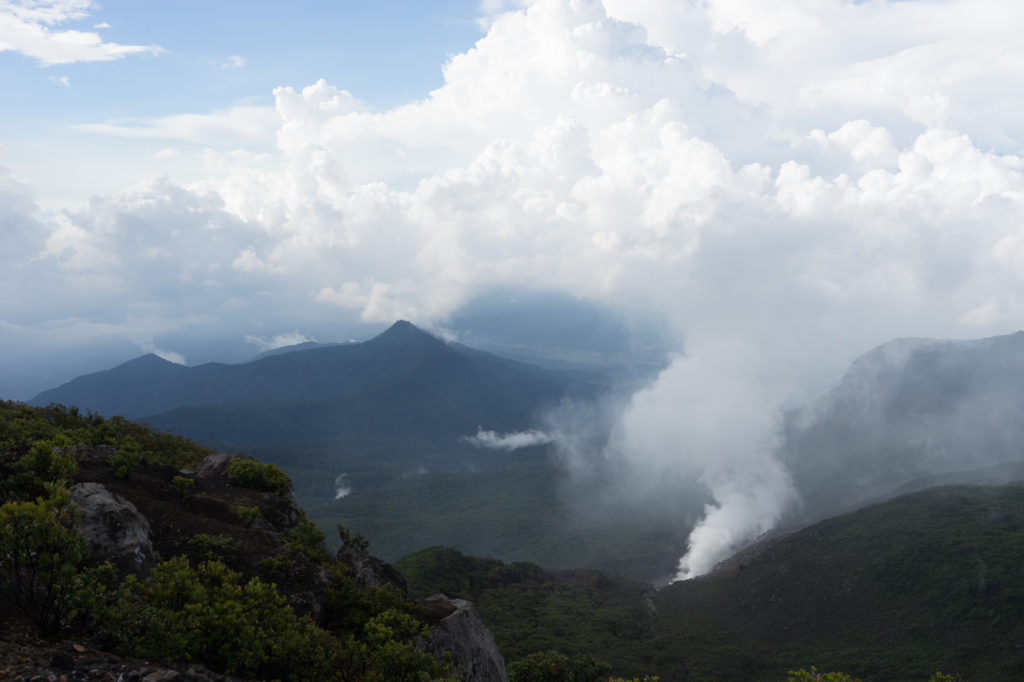 Fumes merging with the clouds

I was blissfully shooting away. Meanwhile Kaman began to get concerned and said we need to start the descent asap as it was getting darker and might rain. So, we better get started. His prediction was spot on. It started raining within the few minutes and we found shelter in a student’s camp where the guys were more than welcoming. We waited for 10 minutes and rain didn ‘t seem to subside and we couldn’t  afford to lose any more time.

We started hiking in the rain. It was one of the best decisions taken, as the rain didn’t stop at all throughout the time (around 6 hours). Not Before too long the whole mountain turned pitch dark. ‘I was scared’ – is an understatement. Again, for Kaman it was just another day at work. We both had a little flashlight each which was the only source of light and the rain didn’t help either. 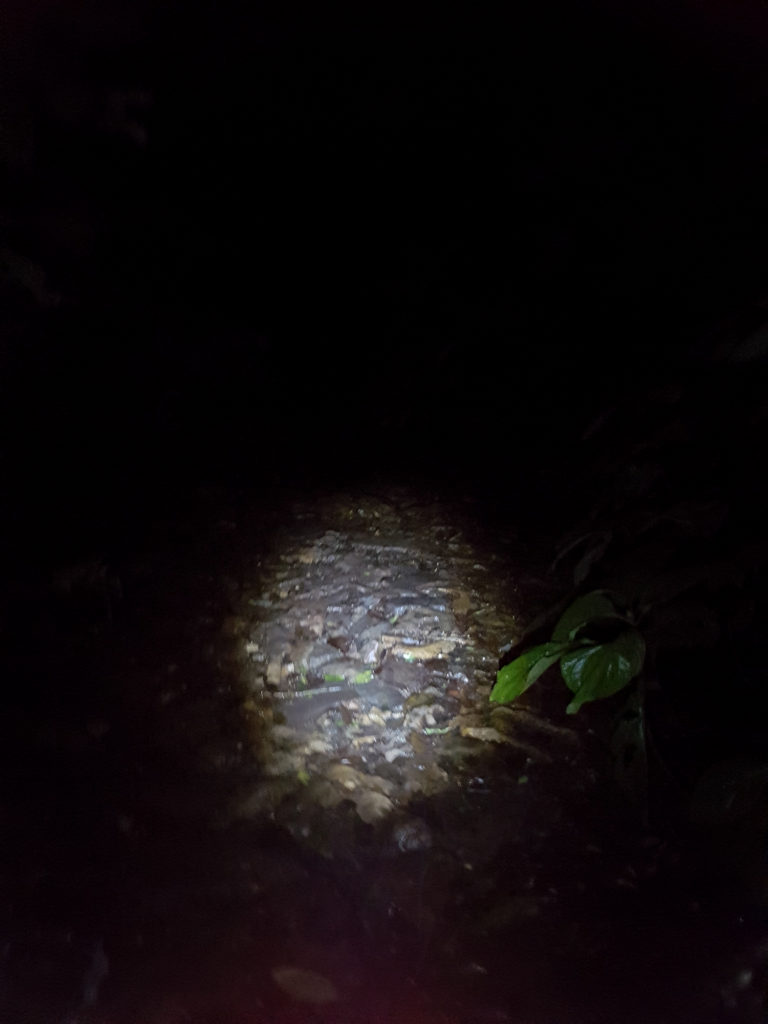 That’s all you see for 6 hours.

I have not done something like this before, but will I be doing this again? Definitely!!!! Thoroughly enjoyed hiking Mount Gunung Gede which was demanding in every sense. Thinking of the whole hike now the best part was the decent in complete darkness and the non-stop rain.

For macro and intimate landscape shot from the same location check out https://hareeshclicks.com/getting-closer-to-gunung-gede/

And here are few numbers and location map 🙂 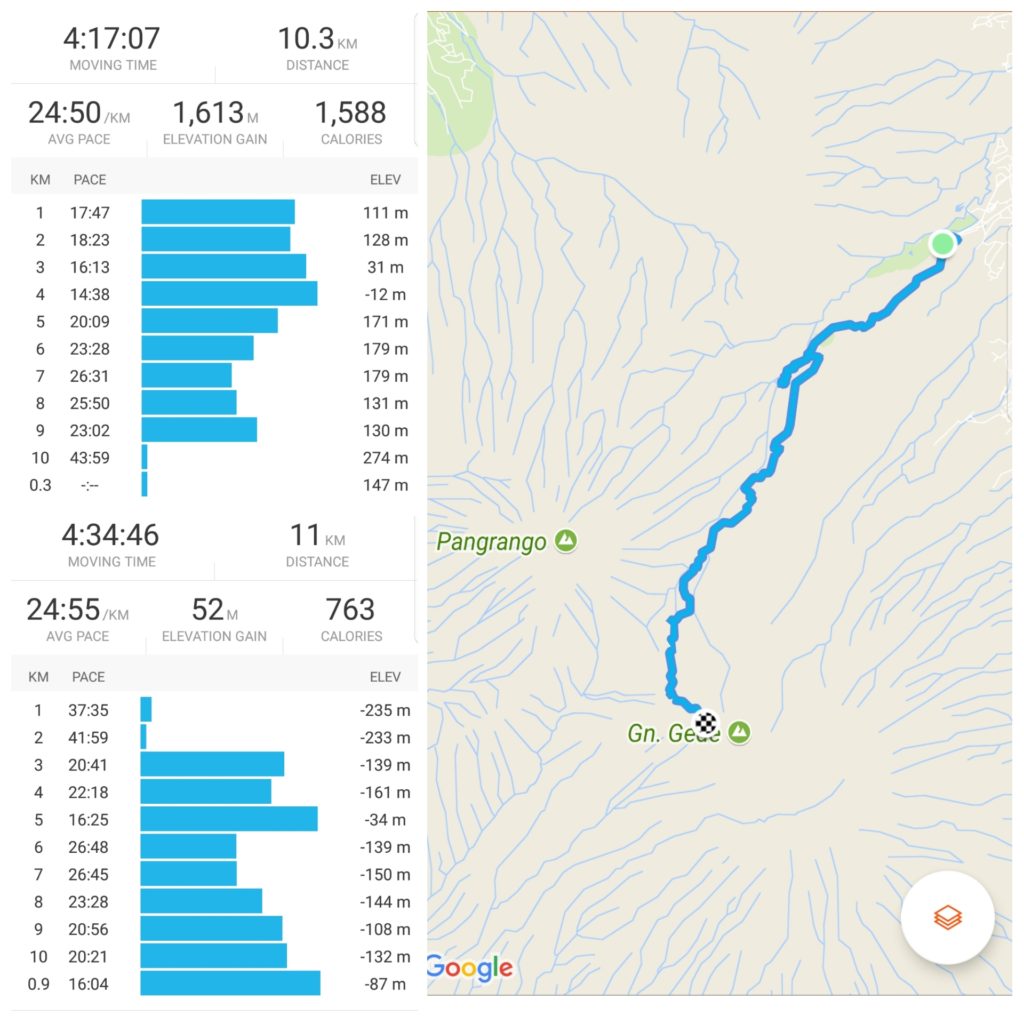